Woody Allen‘s You Will Meet A Tall Dark Stranger is powered by dark whimsy. Set in London, it’s a mildly amusing, somewhat chilly film with no piercing performances or dramatic highlights even, as if everything and everyone is on a regulator of some kind. And yet the undertone has a steady and persistent misanthropic flavor. And it leaves you with a kind of “uh-huh, okay” feeling at the end. 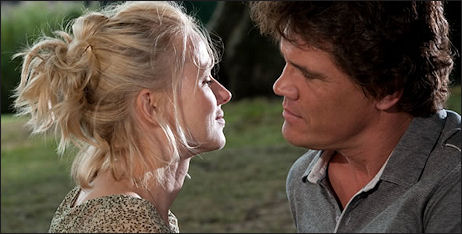 Naomi Watts, Josh Brolin in Woody Allen’s You Will Meet A Tall Dark Stranger, which screened at 11:30 this morning in Cannes.

It’s not a bust — there’s food for thought and reflection — but it’s not my idea of enlivening material.

The film is about people making terrible or lamentable choices and missing opportunities and hoping for something more or better and struggling with inevitable limitations. In short, it’s about what a sad bunch of clueless, desperate and delusional schmucks we all are.

It therefore has a certain integrity. But it feels middling or, truth be told, minor. It has irony, obviously, but not the delicious Match Point kind. There’s a solemn God’s-eye perspective at work here, but there’s no kick to it. We’re driven by longing and dreams but things don’t always work out. We want what we want but we get what fate doles out. Plop.

I don’t want to go out on a limb, but You Will Meet A Tall Dark Stranger doesn’t deliver my idea of what most moviegoers are looking for, or are likely to enjoy. I’d have to be goaded into seeing it again. It’s grade-C Woody….sorry.

That means it’s a bit less than Cassandra’s Dream, slightly better than Scoop or Curse of the Jade Scorpion or Anything Else, and in roughly the same realm as Another Woman, September, Shadows and Fog and A Midsummer Night’s Sex Comedy. Then again (and I say this almost every time I review one of his films) a grade-C Woody is like a B-minus or even a B along the general curve.