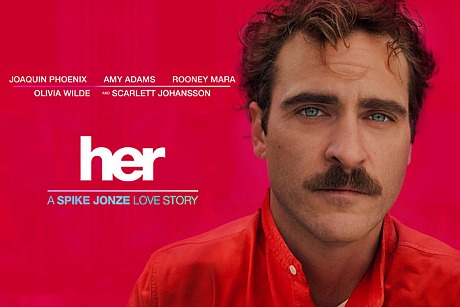 The relationship between Samantha and Twombly, who writes sensitive, intimate letters for people who lack the ability, is not presented as some pathetic sad-sack tale or something farcical or comedic. It’s on the level — a straight, sincere love story with the all the usual (and a couple of highly unusual) ups and downs. I was saying to myself, “This is really something else…those tweets from New York critics weren’t exaggerated…I’m really glad that Spike is back in the groove after Where The Wild Things Are.” Plus it delivers a finely attuned, open-pored performance from the great Joaquin Phoenix and also, surprisingly, a voice-only performance from Scarlett Johansson that may be her most expressive ever. And I was down with Amy Adams‘ performance as Twombly’s best friend, and Rooney Mara‘s as his ex and Olivia Wilde‘s turn as a blind date.

Her convinced me that it might be interesting and perhaps even nurturing to fall in love with a lady like Samantha. I probably won’t be around when computer technology becomes sophisticated enough for this to happen, but I’d like to be. Not as a substitute for the real thing, but as a kind of ongoing intimate thing on the side. I know that what Phoenix and Johansson go through in Her is just as much of an emotional journey and adventure as any classic love affair you can point to. I was saying to myself, “I could do that.”

Her is set in a very realistic-looking Los Angeles of about…oh, 40 or 50 years hence (and not in the very near future as some critics are saying). Okay, it could be happening in 2050 but not before. L.A. looks like Shanghai. In fact Jonze shot some of it in Pudong, a Shanghai suburb. Some of the cityscapes are first-rate CG imaginings, I’m guessing. It looks like a horrible, soulless place to live, halfway between now and Blade Runner but without the acid rain. But it’s not a fantasy town. It’s “real” and populated, like today, by great masses of lonely people. And the movie really sinks in. It’s a very romantic ride, although it’s aimed, truth be told, more at the gluten-free, kale-salad crowd than the popcorn eaters.

I suspect that Joe and Jane Popcorn might feel a tiny bit disappointed by the finale. It doesn’t conclude with quite enough punch or lift or finality. Something else needs to happen, and it doesn’t.

But endings aren’t everything. No one will shift in his or her seat during the vast majority of the film’s 119-minute running time. I’ll say again that the current between Phoenix and Johansson is probing and real and flush with the genuine nectar of love — it really delivers the feeling of an intense affair, and is therefore relatable and then some. And moving. And fascinating. This is a unique and often mesmerizing film. Hats off to Spike & Co. He’s taken the usual online and smart phone tendencies that everyone indulges in or is at least susceptible to and added a few decades and delivered one of the most unusual (and yet wholly affecting) love stories in a long, long time.