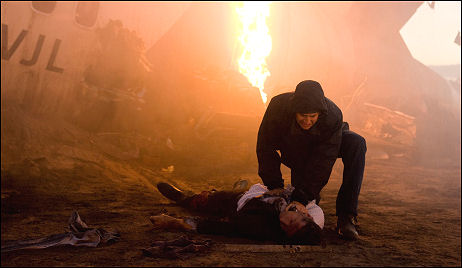 Knowing is complete exploitation crap. Simplistically written, lurching from one tingly shock moment to the next, operating in total defiance of any semblance of rational human behavior. It will burn your soul and leave you poisoned. It will give you hives between your ass cheeks. And it will make you laugh at the end. Derisively, of course. That’s what the crowd at the 42nd Street Regal plex was doing the other night as the credits began to roll. Waves of giddy “what a piece of shit!” laughter rolling across the aisles. An hour earlier the world had just learned about the passing of Natasha Richardson. What a contrast. Good God.

This is due to director Alex Proyas, of course — a quarter-of-an-inch-deep, visual-for-visual’s-sake CG whore who…I don’t know what precisely happened so I shouldn’t speculate. But Knowing feels as if Proyas and the producers said to themselves, “You know what? To hell with the precognition numerology stuff. Let’s just blow shit up and burn people alive and throw in some spooky aliens and…you know, go to town on that level. We’re making this film for people who read supermarket tabloids so what does it matter if it’s more or less nonsensical?”

The screenplay is by Ryne Douglas Pearson, Juliet Snowden, Stiles White and Stuart Hazeldine. If I were these guys I’d put on a pair of dark glasses and a fishing hat with the brim pulled down. Better yet, I’d fly down to Belize and stay there for two or three weeks until the smoke clears.

But I have to admit that Proyas does a bang-up job with the rainy plane-crash scene. Awesome choreography and hand-held photography, directed and coordinated in a first-rate fashion. it’s almost worth paying to see Knowing for this scene alone. But it also convinced me that Proyas has a bone-on for depicting people screaming for dear life as their flesh is roasting and they stagger around before flopping down dead in the gasoline-soaked mud. Kew-wuhl!

This is the end of Proyas. He’s crossed over into hell with this movie. When you think of him henceforth, think of him running through a raging forest fire as he carries his digital camera, his clothes and flesh consumed in ghastly orange agony as the animals of the forest — squirrels and rabbits and antlered deer — suffer the same fate. Proyas screams and bellows and begs God to forgive him, but God, having seen I, Robot, refuses.

I have a reaction to Cage’s performance, of course, but I’d rather run it as a stand-alone.