Director Morten Tyldum speaking to EW‘s Sara Vilkomerson about Passengers (Columbia, 12.21): “Every generation has its love story. I feel like this is it. And [making it was] exhausting. It’s big emotions, it’s desperation, it’s love, it’s happiness, it’s fear, it’s anger. You will laugh and cry and hold your breath and be at the edge of your seat. It has chills. It also will make you smile and laugh a lot. We wanted a playful movie.” 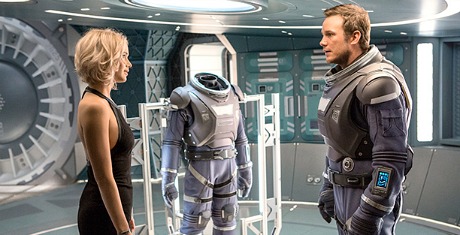 As noted, I’ve a read a revised draft of Jon Spaihts’ Passengers script, and as far as I know it’s more or less what was shot last fall by Tyldum and costars Chris Pratt, Jennifer Lawrence and Laurence Fishburne. Maybe the script has been significantly rewritten. If the film plays according to the synopsis in Vilkomerson’s piece, then plot cards have indeed been reshuffled. And that’s fine.

Partial Vilkomerson synopsis: “Lawrence and Chris Pratt [are] on a luxury intersteller spaceship bound for the Homestead II colony 120 years away. They’re two out of 5,000 souls traveling in suspended animation before they’re mistakenly awakened 90 years too early.” The Wiki synopsis says the space ship “has a malfunction in two of its sleep chambers…as a result, two hibernation pods open prematurely.” That’s technically accurate as far as the Spaits screenplay is concerned, but not in the way you’re thinking.

I know that if the movie sticks to the Spaihts draft, Passengers will be no one’s idea of a great love story. At all. It’s more in the realm of super-diseased. I’ll let it go at that. I was just taken aback by Tyldum’s “every generation has its love story” quote, and I had to say something.