The Nate Parker Penn State matter broke yesterday morning wth a Michael Cieply/Michael Fleming piece in Deadline, and then a Ramin Setoodeh piece in Variety yesterday afternoon. Pretty much everyone jumped on it within an hour or two.

Except for The Hollywood Reporter, that is. There’s been no coverage — not a peep, not a whisper — from that venerable trade over the last day and a half. Presumably they were angry about getting scooped by Deadline/Variety, but you’d think they’d at least weigh in. I’m guessing they’re assembling a Parker story of their own as we speak with intentions to publish on Monday morning. 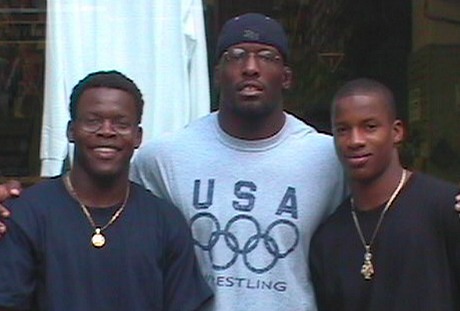 (l. to r.) Jean Celestin, Kerry McCoy, Nate Parker back in the day.

The Parker thing is not, in my judgment, a fair-minded thing to get into. If it had been my call I would have left it alone, but now the cat is out of the bag. And it just seems weird that the Reporter staff (particularly award-season columnist Scott Feinberg) would just be silent about the whole matter. It’s surely going to reverberate.

I was discussing the Parker thing earlier today with an east-coast friend, and he said the following: “Whether The Birth of a Nation is a good or bad film is irrelevant. But I do think Parker’s recent comments — ‘I can’t go back there’, ‘it happened 17 years ago’, ‘that’s that’ — are not how he should address the case. He almost seems to be in denial about the whole thing.”

My reply: “He’s not ‘in denial’ as much as just living in the now. You can’t carry your mistakes and your ugly deeds around with you. You have to shed them like a snake sheds skin. You have to clean up, shake it off.

“Did Nate kill anyone? Did he sell state secrets to the Russians or Chinese? Did he join ISIS and cut off a couple of heads? Is anyone in a wheelchair as a result of his actions? Did he molest any children, cut off the heads of any dogs or cats? No — he and Jean Celestin acted like dogs with a drunken girl 17 years ago. The victim freaked, primarily about an unwanted instance of oral sex with Celestin. She got angry, went to the authorities…who could blame her?

“The woman in question is now…what, 36, maybe 37? Maybe married, maybe with kids. I’ll bet that even though she was clearly the injured party, she’s not interested in going back there either. Just like Samantha Geimer, the victim in the Roman Polanski case, she’s probably saying to herself, ‘Enough…my life is about more than just one traumatic thing that happened in a college dormitory room in August of ’99.’

Then I thought maybe the best way to put it to bed is to find to the victim and ask if she wants to say anything. Not to stir shit up, but to see if she’s interested in sharing Geimer-like quotes. You know, “Please leave it alone, let’s move on, I’ve forgiven Nate and even Jean,” etc. If she doesn’t want to talk or even be identified, that’s obviously her call. I just want to ask.

So I wrote Philadelphia Inquirer reporter Marc Schogol, who filed a 12.7.01 story about Celestin having been expelled from Penn State over the matter. He’d quoted the victim in the piece, and I thought maybe he could give me an idea about how to reach her.

But the email bounced back. Because Marc Schogol died of cancer in 2007, at age 58.