Earlier today Rope of Silicon‘s Brad Brevet asked the usual columnists whether Another Year star Lesley Manville — a glorious actress giving a very sad, world-class performance — should be pushed for Best Actress or Best Supporting Actress. Here’s the piece. Eight people chimed in. What I wrote is pasted after the page photo: 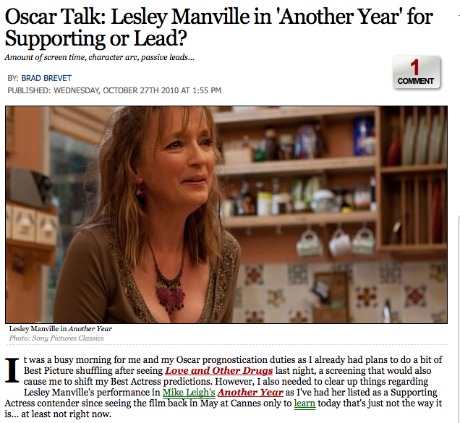 “You said, Brad, that you just got off the phone with Sony Classics co-honcho Michael Barker and that he said ‘at the moment they are going with lead based primarily on the reasoning Manville is supposedly in the movie more than anyone else.’ Well, none of that means diddly-squat.

“What matters isn’t screen time or whether or not Manville does play the lead female role in Mike Leigh‘s Another Year. What matters is what you can get away with in order to win an Oscar that will propel the film’s box-office and ancillary sales. That’s it, the whole game, end of story. And Sony Classics can EASILY get away with calling Manville a Best Supporting Actress in that film. EASILY. PIECE OF CAKE.

“And if they do this, the odds of their getting a win out of it will be very…okay, relatively high. That’s the whole thing, the whole game.

“Ms. Manville, with whom I’ve spoken, very much wants to win as it will do good things for her career-wise. Barker knows what the Best Actress competition is likely to be, and it’s no duck walk this year. No disrespect to Ms. Manville — she’s very, VERY GOOD in Another Year — but she’ll be facing some very tough opponents, and the odds of her winning will not be high — let’s face it. If Sony Classics wants her to win an Oscar, there’s really only one thing to do.”