Manhattan Will Be An Underwater Theme Park Sooner Than Previously Expected 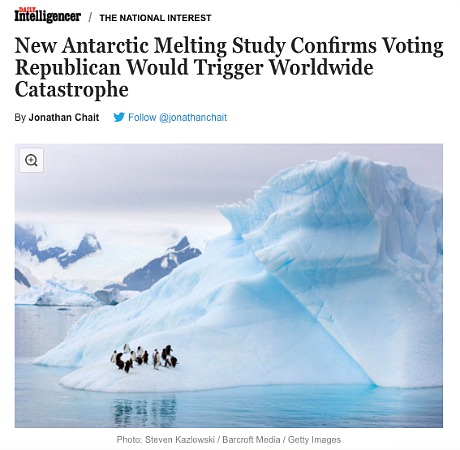 But, Folder wrote, “climate scientists now estimate that Greenland and Antarctica combined have lost on average about 50 cubic miles of ice each year since 1992 — roughly 200 billion metric tons of ice annually. Many think sea level will be at least three feet higher than today by 2100. Even that figure might be too low.”

Gillis: “Continued high emissions of heat-trapping gases could launch a disintegration of the ice sheet within decades, according to a study published Wednesday, heaving enough water into the ocean to raise the sea level as much as three feet by the end of this century.

“With ice melting in other regions, too, the total rise of the sea could reach five or six feet by 2100, the researchers found. That is roughly twice the increase reported as a plausible worst-case scenario by a United Nations panel just three years ago, and so high it would likely provoke a profound crisis within the lifetimes of children being born today.”

More from Gillis: “For half a century, climate scientists have seen the West Antarctic ice sheet, a remnant of the last ice age, as a sword of Damocles hanging over human civilization.

“The great ice sheet, larger than Mexico, is thought to be potentially vulnerable to disintegration from a relatively small amount of global warming, and capable of raising the sea level by 12 feet or more should it break up. But researchers long assumed the worst effects would take hundreds — if not thousands — of years to occur.

“Now, new research suggests the disaster scenario could play out much sooner.

“New York City is nearly 400 years old; in the worst-case scenario conjured by the research, its chances of surviving another 400 years in anything like its present form would appear to be remote. Miami, New Orleans, London, Venice, Shanghai, Hong Kong and Sydney are all just as vulnerable as New York, or more so.”

The new report, published in Nature, was co-authored by two Pennsylvania State University researchers, David Pollard and Richard B. Alley.

March 31, 2016by Jeffrey Wells51 Comments
« Previous post
Others May Laugh But I’ll Probably Just Sit In Respectful Silence
Next post »
Movies You’ve Not Only Missed But Will Never, Ever See