Despite an angry studio publicist’s denial, Radar‘s Kim Masters is reporting in a just-up Radar piece that Spider-Man 3 (Columbia, 5.4) has surpassed 1963’s Cleopatra as the most expensive movie ever made. With the enthusiastic go-go support of Sony chairperson Amy Pascal, Sam Raimi‘s third and presumably final Spider-flick cost $350 million, she writes, compared to Cleopatra‘s inflation-adjusted budget of $290 million. 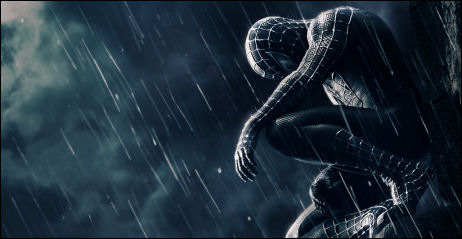 Add a guesstimated $150 million in marketing costs and Spider-Man 3‘s final tally will be $500 million, according to Masters’ calculations.

Spider-Man 3 is pretty much ding-proof — the fanboys are going to break down the doors no matter what — but Masters’ article will muddy the waters. Add this to the so-far tepid reviews and the spreading awareness and/or growing prejudice that revved-up, cranked-up CG extravaganzas are dead-end sits because of their constant war between their two halves (being 50% exciting in an obvious thrill-ride sense and 50% numbing in a sensory-overload sense, which leads to 100% depression by the time the third act rolls around), and the stage is set for U.S. ticket-buyers to go into it with a skeptical, perhaps even bordering-on-sourpuss attitude.

An absurdly expensive movie of this proportion — whether it cost $270 million or $300 million or more — means at the very least that Spider-Man 3 was a huge corporate pig-out for all the major creative players. And now you, Mr. and Mrs. Paycheck, are expected to show up at theatres on May 4th and pay your ten bucks so the machine can keep rolling and all the fat players can go to the trough again and again. Keep it rolling, keep it rolling…support the elite Hollywood profligates! They would be lost without you.

“On the surface, Spider-Man 3 has all the ingredients of a box-office slam dunk — √É‚Äö√Ç¬≠spectacular special effects, an obsessive fan base, and a roster of bankable stars,” Masters writes. “Moreover, its two previous installments have grossed $1.6 billion for the studio.

“Even before filming began in January 2006, [director] Sam Raimi promised to pull out all the stops for his third Spidey film (likely the last he’ll direct in the series). He wasn’t kidding. As production dragged on into late summer (it had been scheduled to conclude in June), stories about the project’s ballooning budget started popping up all over town. But in the end, even the most hyperbolic of observers may have underestimated the final tab.

“Industry insiders claim that Sony spent $350 million or more on production alone. With marketing and promotion factored in, the total price tag will approach half a billion dollars, positioning Spider-Man 3 as the most expensive movie of all time.

“Still reeling from a flurry of bad press on its PlayStation 3 gaming console, Sony isn’t eager to claim this honor. A studio spokesman angrily rejects the $350 million estimate as a ‘complete fabrication,’ insisting that production costs didn’t exceed $270 million. One of the film’s producers, Laura Ziskin, also disputes the higher total, albeit in a less forceful manner. “I refuse to say the [real] number because it makes me choke,” she tells Masters. “Spider-Man 3 was a super- expensive movie — the most expensive film we’ve ever made. But there’s no way you can get to $300 million.”

“Reports of Sony’s record-breaking gamble have created a stir among entertainment insiders, seeming to evoke some combination of schadenfreude and envy. “Those are crazy numbers,” remarks one leading industry figure.

“I don’t think this sets a great [precedent] for any of us,” complains a top executive at a rival studio. “It’s beyond the beyond. The problem isn’t that other studios will now feel liberated to drop $300 million on a movie. The real danger is that it makes the $200 million movie seem not quite so bad. And the risks of that can be absolutely devastating.”

“Noting Sony’s long and storied history of overspending, the head of another studio asks, “Where is the corporate oversight? Who’s demanding accountability? How is it that they’re repeatedly able to conduct themselves in this manner?”

“To be fair, Sony is hardly the only studio spending big bucks on tent-pole projects. Shrek the Third blows into multiplexes two weeks after the new Spidey film, with Pirates of the Caribbean: At World’s End right behind it. Next come the Fantastic Four sequel and Steve Carell‘s Evan Almighty. Then, on Independence Day weekend, Transformers hits the screen.

“None of these projects was cheap. Indeed, the third installment of Pirates may also sail past the $300 million mark. But in contrast to the Spider-Man series, the second Pirates film outperformed the original and grossed more than a billion dollars. (Spider-Man 2 took in $783 million, or about $40 million less than its predecessor.)

“Sony’s free-spending ways have been evident ever since the Japanese electronics giant acquired Columbia Pictures in 1989, causing much consternation among competitors who feel pressure to match the studio’s largesse. The first chairmen in the Sony era, Jon Peters and Peter Guber, spent so much money that the studio wound up taking a $3.2 billion write-down. The two were eventually fired, but business continued as usual. In 1996, chairman Mark Canton blew the roof off star salaries by awarding Jim Carrey an unprecedented $20 million for his role in The Cable Guy, a film that disappointed at the box office. Soon after, Canton was also gone.

“To many observers, though, the budget for Spider-Man 3 represents a terrifying new frontier, even for Sony. As other studios try to cut costs, Pascal has continued in Sony’s profligate tradition.

“The only woman currently heading up a major studio, she also happens to be one of the most popular executives in the business,” Masters concludes. “That’s largely because she seems to have a genuine love for movie-making at a time when many of her peers are fixated on the bottom line. ‘Amy’s greatest strength is her intuitive, creative ability,’ says a longtime associate. ‘Her greatest weakness is that she lets that same ability get completely separated from any sense of fiscal restraint.'”