In a 7.13 “Bart & Fleming” chat, Deadline‘s Michael Fleming offers what seems to me like a brilliant suggestion for Melissa McCarthy, one that could possibly save her career from the post-Tammy backwash.

“Hollywood tried forever to remake the brilliant British miniseries Prime Suspect, but could never find the formula,” Fleming reminds. “Helen Mirren shone as Inspector Jane Tennison, subtly using her smarts to overcome workplace sexism and alcoholism. She solved crimes and earned respect and authority in most believable ways. How about McCarthy in the remake? Each of her movies introduces her in an increasingly unflattering visage until her true self shows through. Then she shines like a new penny, and we get a glimpse of how good an actress she really is. Imagine her as Tennison, overcoming disrespectful underlings who marginalize her appearance and gender.

“Did we just find Melissa her Oscar role? I’d rather see her in that than another formulaic comedy that will stereotype her if she is not careful.”

Fleming is being typically kind. He knows that McCarthy has already typecast herself with that vulgar, lower-middle-class angry schtick, and that she’s in trouble right now because of it. It’s over. Rejuvenation essential.

On the other hand Fleming is dead wrong when he declares that Blake Edwards “did no favors for the elegant Julie Andrews when he had Mrs. Von Trapp and Mary Poppins doff her top in his film S.O.B.,” which came out in ’82. In fact, that scene liberated Andrews from that suffocatingly prim and sexless persona she had cultivated over her long career, and which had been tampered just once (and only once) before, in Paddy Chayefsky and Arthur Hiller‘s The Americanization of Emily (’64). 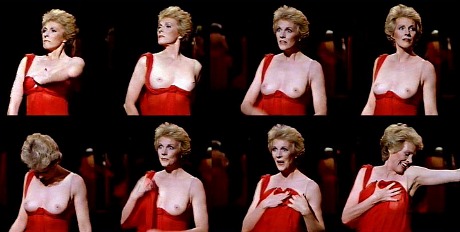