You Don’t Mess With the Zohan was a huge surprise for me in that I almost loved it. I was certainly cool with most of it — smirking, smiling, content, zero pain. Either I was exactly on its wavelength from the start or it was on mine, but Zohan was the first dumbass Sandler comedy I’ve felt fairly okay about. I was actually charmed at times. 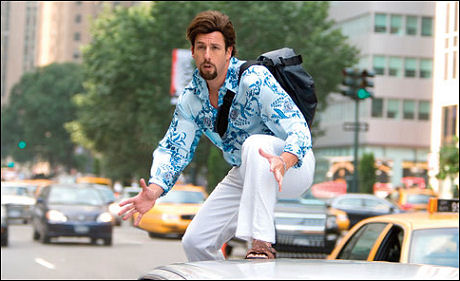 The trick is that it crosses the total silliness threshold early on and stays there. Plus it has actual political content, satirical machismo, fantasy narcissism, a kind of vaudevillian energy, crudely boorish but dead-on Hebe humor (and I know whereof I speak, being a former New Yorker and occasional Brooklynite) plus one relentlessly stupid performance after another — Adam Sandler, John Turturro, Rob Schneider, Shelley Berman, Lainie Kazan, etc. Schneider and Turturro are off-the-planet funny now and then.
Zohan (Sandler) an Israeli superstud Mossad agent or whatever, fakes his own death to escape the repetition (i.e., constantly fighting Palestinians and other anti-Zionists) and realize his personal dream of becoming a hairdresser in the States. He knows about cutting hair, but hours after hitting Manhattan his Israeli-ness leads to a quick banishing to Queens and yaddah-yaddah blah-dee-blah. It’s all about the balance, the shtick, the dopey effects and…well, the you-know-where-it’s-going-so-just-enjoy-the-how-of-it aspects, of which there are many.
I was disappointed to learn that the Zohan team, nominally led by director-stooge Dennis Dugan, didn’t shoot the opening scenes in Israel but in Cabo San Lucas and La Paz. They’re going to make tens of millions on this thing and they couldn’t muster the courage to shoot in the actual Holy Land? When you’re doing a fantasy comedy, you need to be as real as possible. My respect for Sandler and Dugan would be that much higher if they’d filled up their man shorts and risked death in order to get it right. 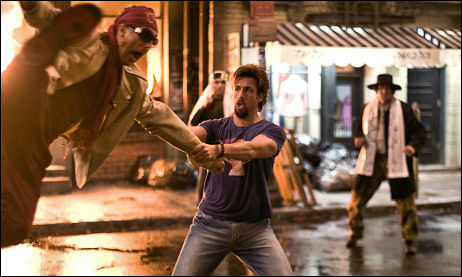 The only thing I really didn’t like last night was a reaction from a guy sitting next to me when the camera showed Turturro lying in bed with 10 or 12 hotties. The guy, a twentysomething, was so impressed that he said “wow!” out loud. He was momentarily dumbstruck by a standard throwaway shot in an Adam Sandler movie! What a bumpkin!
I decided to leave right a couple of minutes after that. There was another 10 or 15 minutes to but I was happy with the film and had definitely gotten the gist. I just knew I couldn’t sit next to that guy any longer. His Clem Kadiddlehopper reaction had eye-dropped a spot of dye into the well, so I figured I’d better get out before the entire experience was ruined.