Indiewire is reporting that Zeitgeist has picked up Trouble the Water, Tia Lessin and Carl Deal‘s doc about the Katrina disaster. It’s a sad and honest film, but the viewing experience is all when it comes to shaky-cam docs. I called it “the King Kong of hand-held nausea jiggle movies” after seeing it at last January’s Sundance Film Festival. The Zeitgeist people are dreaming if they think people are going to rush out to see this. 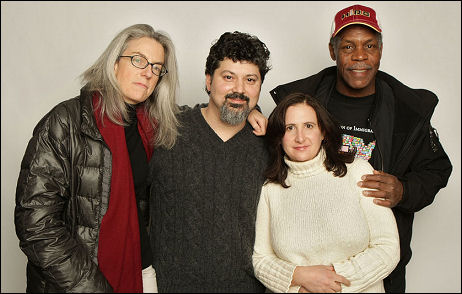 As I wrote last January, “Half of it was shot by Lessin and Deal in the usual fashion and is no big challenge, but the other half is shakycam footage of Katrina’s devastation shot by one of the film’s main subjects, Kimberly Rivers. (The other is her husband Scott.) The footage is so scattered and whip-panny that I was starting to think about bolting less than ten minutes in.”
I’ll feel better about this whole matter if Rivers agrees to take an ad in Variety pledging that she’ll never shoot any more video footage of anything ever again, will never go to film school to try and learn how to shoot, will stay away from the visual art world for the rest of her days, etc. If she does this, it’ll start to undo some of the damage.
All I know is that as I watched Trouble the Water at the Park City Library, I was saying to myself, “Whatever it is that good amateur video photographers have, this woman has absolutely none of….the gene that tells you how to hold the camera and how to shoot in a way that’s pleasing or at least non-jarring to the eye has bypassed her entirely. Lemme outta here!”