I saw Oren Moverman‘s The Messenger last July. I went with the menu, respected the chops and intent, found Samantha Morton‘s performance as a bereaved Iraq War widow especially moving. (So far the film has a 100% Rotten Tomatoes rating.) Last night I attended the after-party at 1Oak following the Manhattan premiere. The Oscilloscope release opens this Friday. 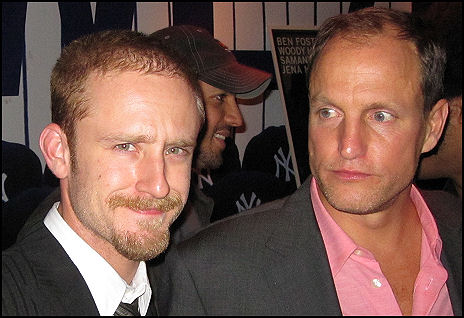 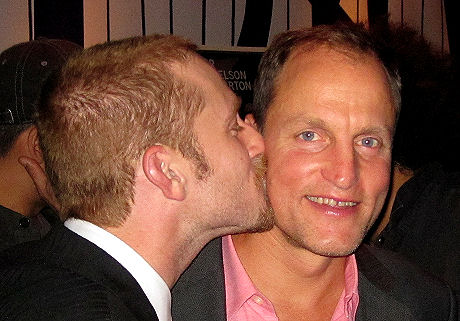 I spoke to Woody Harrelson briefly about that Sunset Strip oxygen bar he owned/ran about eight or nine years ago. We could have gotten into loads of other topics but the loudness of the party and the three or four people hovering nearby, waiting for the slightest opening (i.e., a perceived lull in the conversation) as a opportunity to dive in and say hi to Woody…but that’s human nature, and what these parties are like every time.

I was a bit hesitant about speaking with Foster because his Messenger performance is, for me, a slight hiccup. There’s something inwardly clenched and raging in Foster that won’t let up. Even when he’s smiling and being gentle as he’s looking at Samantha Morton, you half-think he’s got plastic explosive strapped to his chest and he’s about to pull the string. He’s a serious actor trying to be real and plain, and I understand that he’s trying to suppress the wired-nutbag thing in The Messenger. But it comes out anyway.

The upside, of course, is that he’s got this quality as a kind of signature, which every actor needs. So it’s better, really, to be “Ben Foster” in this sense than to be one of hundreds or thousands of likable edgeless actors just looking for work. He’s definitely a brand and a personality. I have this inkling that he’d be great in a comedy.

The Messenger “joins the group of strong Iraq-war movies that, like rejected suitors, stand hat in hand, waiting for an audience to notice their virtues,” writes New Yorker critic David Denby. “My canon includes In the Valley of Elah, The Hurt Locker and the commercially conceived but affecting Stop-Loss. Box-office wisdom holds that it’s too early to make movies about this conflict, but how can it ever be too early to make a good movie?”