John Anderson has written a 6.22 N.Y. Times piece about Cecilia Miniucchi‘s Expired, an “anti-romantic comedy” starring Samantha Morton and Jason Patric “as erotically charged, thoroughly incompatible parking enforcers working the mean streets of Santa Monica.” It’s also a film that, prior to Anderson’s article, has been having difficulty getting attention. 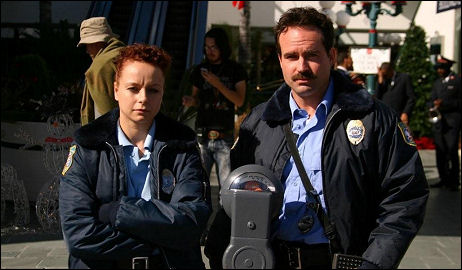 I never got around to seeing it at Sundance, Cannes or the local AFI Fest. (Sue me.) And for screening-conflict reasons I decided not to catch the one press screening I had a shot at, which happened yesterday evening. (The other one happened on May 13th, when I was in France.) Expired opened last Friday (6.20) in New York and will have its LA debut four days from now — on Friday, 6.27.
Anderson says the film “has already defied expectations” because “it’s being given a theatrical release in an atmosphere in which serious, personal filmmaking is being produced independently and exiled to the furthest margins of the marketplace. Not coincidentally, the root causes of all this are central to the film.”
√É¬¢√¢‚Äö¬¨√Ö‚Äú’We are living in a very transitional moment right now,’ Miniucchi says, ‘in terms of what to do with quality films. The common denominator among distributors is fear, the reason being the internet. You don’t need to have a face anymore. Kids interact without ever meeting. They have sex without ever meeting.'”