I don’t know which of these Malibu surfer-brawl videos, taken yesterday, happened first — clip #1 or clip #2. But any beating up of paparazzi by anyone is a good thing as long as no one gets killed or crippled. Black eyes are good, bruises are good, broken cameras are good, missing teeth are good…all of it. 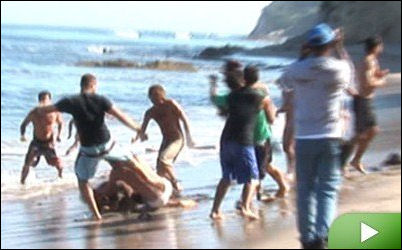 Paparazzi are pigs in the gutter — the scumbucket jackals of worldwide celebrity culture. The lowest of the low, covered in their own slime. They deserve every bad thing that happens to them except death or disfigurement or being turned into paraplegics.
The fighting was about a dog-pack of twelve photographers trailing Matthew McConaughey to a cliff-shrouded Malibu beach he’d visited in order to surf and sunbathe. Matthew McConaughey! A group of surfers attacked the paparazzi in quick little skirmishes — giving one guy a broken nose, breaking another’s camera, pushing the same onto some rocks, etc.