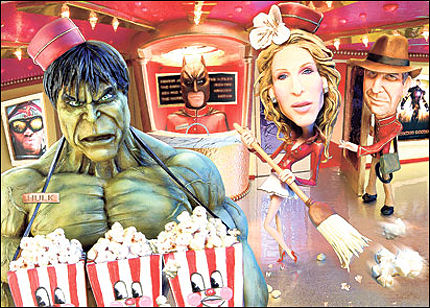 “These women are the ultimate female superheroes,” says exec producer Michael Patrick King. The original HBO show “was made to correct the myth that if you were single at a certain age, you were a leper. Its four characters are heroes to a lot of women; they run around New York, or Gotham — but they have fancy shoes instead of capes.”
“But the ladies, too, are a little older than the last time we saw them,” the article states. “In the film, they’re in their 40s,” which, in King’s words, is a “different, somewhat-tougher time” than their 30s,” which the television series focused on. “If you want to see the girls at 34, you can turn on your television every night or rent the DVDs,” he says. “I knew the one mistake I could make in the film was to freeze-dry them and pretend they weren’t in their 40s now.”