This? This is it? An air-filled McDonald’s milkshake delivered in a generic blue plastic Dixie cup sent to journalists and columnists as a “joke” promotion for There Will Be Blood? Okay, cool, thanks…but if I’d been the Paramount Vantage publicist handling this I would have gone with a strawberry or chocolate shake (blood, dirt, oil). Vanilla seems kinda wussy in this context. 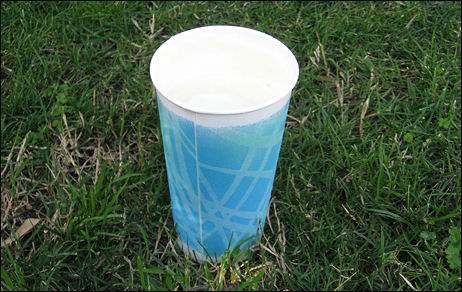 And the cup should have been specially designed with a photo of Daniel Day Lewis sucking down a shake with a bent straw…vif-vif-vif-vif-vif! And the shakes should have been come from Haagen-Dazs or Ben and Jerry’s or some chi-chi ice cream shop in Beverly Hills — McDonalds is for peons! (Do you run a class shop or don’t you?) And the delivery guy should have worn a Daniel Plainview costume — wide-brimmed hat, brown lace-up boots, fake moustache, oil smears on his cheek and neck and shirt sleeves.
I don’t mean to sound snarly or ungrateful — thank you, Paramount Vantage! — but in the world of milk-shake delivery promos you should do it “right” (bucks-up, sky’s the limit, nothin’ but class) or not at all.

February 8, 2008by Jeffrey Wells23 Comments
« Previous post
How deep and wide?
Next post »
Why It’s Okay to Hate Hillary