I didn’t see all Xavier Dolan‘s Mommy at the Cannes Film Festival (roughly 75 minutes worth) but enough to understand two things. One, it’s a highly original, presumably personal dysfunctional-family-combat movie, primarily distinguished by Anne Dorval‘s performance as the feisty titular character, a woman of unflagging tenacity who’s burdened with a hyper-manic teenage son from hell (Antoine-Olivier Pilon). And two, I had to see the whole thing (114 minutes) sooner or later, even though I didn’t particularly look forward to suffering through Pilon’s bullshit a second time. 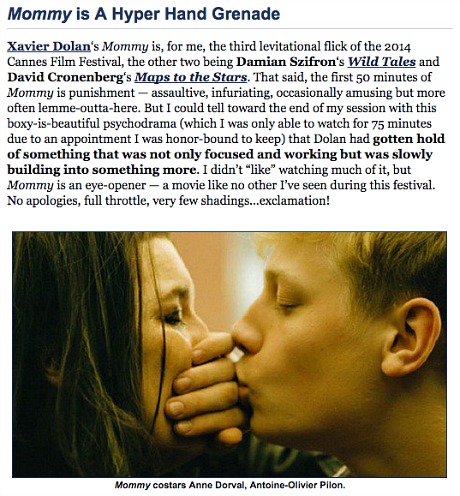 Well, I saw all of Mommy last night in Telluride, and I have to be honest and say I think less of the film now. I’m just going to cut to the chase and post a conversation that transpired this morning between myself and a female Mommy admirer.

Me: “Not that great in the end, too long, story doesn’t build to any kind of finality or profound thematic resolution except for the cliche about how we all gave to keep going and have hope blah blah. Mom has hope while the kid makes a break for it inside a mental hospital?”

Her: “It’s not your thing. Still a great flick.”

Me: “‘Not my thing’? Nothing really happens. He’s hyper and crazy, he’s out of a facility, he wants to be loved, he’s sweet, the teacher across the street likes him, he makes little hand bracelets, he’s crazy, he threatens his mom, they all dance around, he hates her would-be boyfriend, the lawsuit is pending, mom commits him to a mental health facility, she says goodbye to the teacher who’s moving to Toronto and says we all have to live with hope, and the crazy kid tries to break out of the facility, which of course he won’t succeed at and blah, blah. You told me it really comes together during the last half — BULLSHIT. NOT TRUE. IT JUST KEEPS GOING FOR 2 HOURS AND 20 MINUTES, AND THEN IT ENDS. The only parts I really liked were when the aspect ratio goes from 1:1 to 1.85. This happens during her happy dream sequence about his future with the wedding and all. YOU GAVE ME A BUM STEER ON THIS ONE. I OWE YOU.”

Her: “I related to this because (a) I was knocked out by Dolan’s original, refreshing, ambitious style and (b) I’m inclined towards crazy women portrayed and explored in ANY FILM in 2014 BECAUSE IT NEVER HAPPENS ANYMORE! Everything is about the MALE EXPERIENCE. Leave it to a 25 year old gay kid, a genius, to dive right in to the female psyche and create not one but two fantastic memorable characters. If you didn’t see that, it’s not the movie’s fault.”

Me: “Yes, it is. IT IS ABSOLUTELY XAVIER DOLAN’S FAULT, and not mine. I am receptive to all portrayals and transportations that work in a compassionate or humanistic way. Wide open to that. I enjoyed Anne Dorval‘s mom — an indominatable ball of grit and determination — but she wasn’t good enough to make this two hour and 14 minute sit worth my while. Pic is WAY too long for what it delivers.”

Her: “You and several critics out of Cannes agree on that. I have a different opinion. Mine is as valid as yours. Sometimes we agree, sometimes we don’t. Not a big deal. You also didn’t like Foxcatcher or Mr. Turner.”

Me: “I respected Foxcatcher — it’s nothign if not well made — and admired Bennett Miller‘s chops, but I found the material fairly repellent. I also respected Mr. Turner — Leigh always knows what he’s doing — but found the material stuffy and meandering and so-whattish and I couldn’t understand half of what Timothy Spall was saying.”

Her: “You like what you like. I tend to go more for great filmmaking over plot or story. If a director surprises and engages my mind as well as my heart — that’s a bonus. Of these three only Mommy also engaged the heart. I liked how twisted it was. I liked that it was an UNHEALTHY relationship of these three people who could not separate yet were killing each other. Very Edward Albee.”

Me: “Yeah, I get that…but not at two hours and 14 minutes. It would have been a moderately okay film at 90 or 100 minutes. But 134 minutes is a killer. And what was that ending? THERE WAS NO ENDING. It was just the same crazy madman shit plus the same feisty unstoppable mom stuff. THAT’S NOT AN ENDING. THAT’S JUST THE MOVIE GOING ‘OKAY, WE’RE STOPPING NOW.'”

She: “Mommy has the same ending as Birdman and The 400 Blows for that matter — escape.”