Late last month the History Channel began airing a show on Predator X, the aquatic superbeast that swam the seas and ate everything and everybody some 147 million years ago. 50 feet long, 99,000 pounds, foot-long teeth, four flippers, etc. 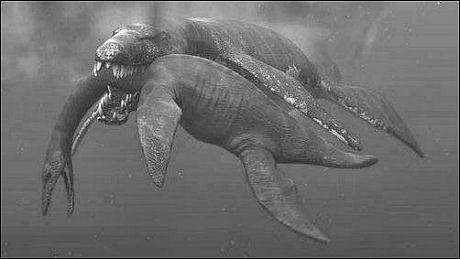 I would pay to see a movie about this guy, seriously, but I wouldn’t want to see it made by McG or Stephen Sommers or Roland Emmerich. I’d probably want something more in the vein of John Sayles‘ Alligator, which is to say adult and knowing but with a slight wink. And yet real. If I were Tom Rothman I would give orders to shoot it in black and white 3D, which would obviously proclaim an ironic attitude. But then I’d flip this around by making the special effects as good as they possibly can be. And I’d somehow work in a scene in which Predator X eats a boatload of Somali pirates.

April 18, 2009by Jeffrey Wells22 Comments
« Previous post
“I Want To Be Your Friend”
Next post »
Perfect Day