Playboy.com‘s Jamie Malanowski attended a special screening last night of Oliver Stone‘s Nixon at the Jacob Burns Film Center in Pleasantville, New York, and then listened to Stone talk discuss this under-appreciated 1995 film as well as W, his forthcoming drama about the interiors of George W. Bush. 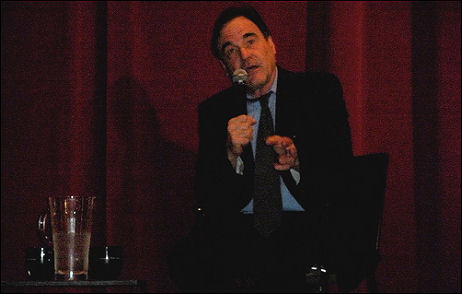 “Why return to the subject of the presidency?,” Malanowski or someone else asked. “‘George W. Bush is a different souffle,’ Stone answered. ‘The film will be more fun [than Nixon]. Bush is dangerous, but he is also goofy, awkward and endearing. A lot of people still like him.’
“Presented with the ultimate question — which man would he prefer be on a long car trip with — Stone unhesitatingly chose Nixon over Bush. ‘He was more intelligent. Bush has done outrageous things, and he has no guilt. He is a backslapper and a salesman. He’s not very deep.”
“Stone, however, says both Nixon and W. ask the same question: ‘Why do we keep going to war? Why do we keep creating enemies? Bush is the latest and perhaps the most dangerous manifestation. Vietnam was a nightmare. It’s amazing that the same characters have returned and sold us another war.”
Stone said he “now believes that 1995 was an unfortunate time to have made Nixon, and believes that if the film had come out in 2006 “with all its parallels” to our current political predicament that it would have done much better. He says that it’s interesting to see Nixon now. “We view him in a different context. He seems almost harmless compared to the current administration.” 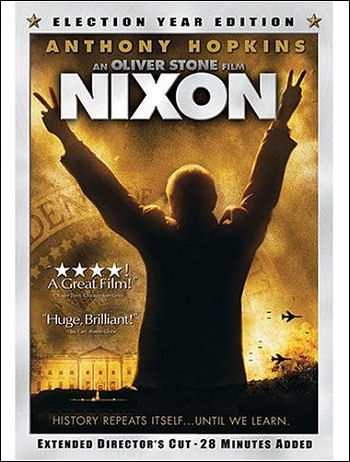 Stone was there to promote a new director’s cut DVD of Nixon coming out on 8.19 in regular DVD and Blu-ray. It will feature “more than 20 minutes of new material,” writes Malanowski, including an eight minute scene featuring Sam Waterston as CIA director Richard Helms.
Why, then does the DVD jacket art claim that “28 minutes” have been added? The original theatrical cut was around 190 minutes so extra 28 minutes would obviously make the new running time 218 minutes, and yet the Amazon listing says it runs 213 minutes. What gives?