In a brief 11.5 riff about the Weinstein Co.’s poster for Tom Ford‘s A Single Man, In Contention‘s Guy Lodge wrote, “Call me cynical, but are they trying to hide the fact that it’s about a gay man?” Gee, I don’t know…maybe? Movie Marketing 101 says that you always conceal or downplay the gay element contained in any film, whether it be in the story or lead character or whatever. The Weinsteiners did the usual thing. 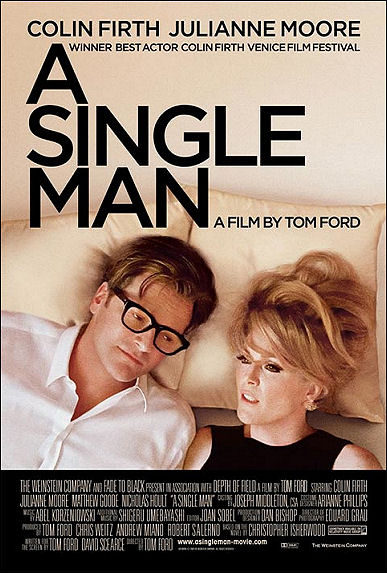 But it’s surprising that they didn’t try and convey the film’s selling point, which for me is its sense of taste and restraint, a feeling of early ’60s elegance, an extravagant and yet muted visual mood. A Single Man is about a gay man, sure, but more precisely about a sad and spiritually deflated one, and while it pulsates with a certain high-toned homoeroticism, it’s really more about rediscovering a yen for life — that sense of want, expectation and delectation that keeps us all going.

I would have tried for a kind of Michelangelo Antonioni vibe if I’d designed the poster. An image that would have suggested a film that delivers a gently classy atmosphere that doesn’t “hide” the gayish current as much as make it palatable and intriguing for viewers of all persuasions.

I was thinking to myself as I walked along First Avenue in the East Village last night that I really love walking around Manhattan. (As long as it’s not windy or bitter cold, I mean.) And it hit me that if you’re not feeling really happy about the relatively routine aspects of your life — about the simple joys of being alive and healthy and mobile and being able to dodge a cab at the last millisecond — then you’re missing something very basic.

Too many people look to highs and crescendos and big career accomplishments in life as the primary definers of happiness or fulfillment. I’ve just been through a stirring and delicious adventure with a beautiful blonde over the past month or so — definitely one for the record books. But I honestly felt more spiritual satisfaction last night on First Avenue than from anything that came out of the hormonal and spiritual intensity of the last four weeks. It’s not the riding of the great waves that matters the most (and I’m saying this as not just a lover of breathtaking women but also boogie-board surfing) — it’s the way you feel as you’re sitting on the beach and watching the waves at sunset, right before you roll up the towel and head for the car.

This feeling of serenity and contentment is what A Single Man puts across at the very end, and it’s really quite wonderful.