Mostly Thumbs Down on Gatsby

The first Great Gatsby reviews began breaking a couple of hours ago, and the consensus so far is that no one except for The Hollywood Reporter‘s somewhat approving Todd McCarthy is feeling especially charmed or elevated. Most of the critics published so far are generally unenthusiastic about the excesses of Baz Luhrmann‘s 3D, CG-ified adaptation of F. Scott Fitzgerald‘s novel.

Declaring that “it don’t mean a thing if it ain’t got that bling,” Variety‘s Scott Foundas says that Gatsby is “like the Macy’s Thanksgiving Day Parade as staged by Liberace. Indeed, it comes as little surprise that the Aussie auteur behind the gaudy, more-is-more spectacles Moulin Rouge and Australia has delivered a Gatsby less in the spirit of F. Scott Fitzgerald’s novel than in that of its eponymous antihero — a man who believes bejeweled excess will help him win the heart of the one thing his money can’t buy.”

“The Great Gatsby uses the unbridled excess of the Roaring Twenties as an excuse to unleash the unbridled excess of 21st century digital effects, but we’re left with nothing but roar,” writes TheWrap‘s Alonso Duralde. “Baz Luhrmann sucks the life out of Fitzgerald’s immortal novel and replaces it with empty filigree and overbearing style.”

“As is inevitable with the Australian showman who’s never met a scene he didn’t think could be improved by more music, costumes, extras and camera tricks, this enormous production begins by being over-the-top and moves on from there,” writes THR‘s McCarthy. “But given the immoderate lifestyle of the title character, this approach is not exactly inappropriate, even if it is at sharp odds with the refined nature of the author’s prose.

“Although the dramatic challenges posed by the character of narrator Nick Carraway remain problematic, the cast is first-rate, the ambiance and story provide a measure of intoxication and, most importantly, the core thematic concerns pertaining to the American dream, self-reinvention and love lost, regained and lost again are tenaciously addressed.”

“To accuse Luhrmann of overkill is a bit like faulting a leopard for his spots,” Foundas adds. “Love it or hate it, take it or leave it, this is unmistakably his Gatsby through and through, and as with all such carte-blanche extravaganzas (increasingly rare in this cautious Hollywood age), it exudes an undeniable fascination — at least for a while.

“In the notes for his unfinished final novel, The Last Tycoon, Fitzgerald famously wrote, ‘action is character,’ but for Luhrmann action is production design, hairstyling, Prada gowns and sweeping, swirling, CGI-enhanced camera movements that offer more bird’s-eye views of Long Island (actually the Fox Studios in Sydney) than The Hobbit did of Middle-earth. Arguably, the movie reaches its orgiastic peak 30 minutes in, with the first full reveal of Gatsby himself (Leonardo DiCaprio), accompanied by an explosion of fireworks and the eruption of Gershwin on the soundtrack. Where, really, can one go from there?”

Here’s a chunk of David Denby’s review in The New Yorker: 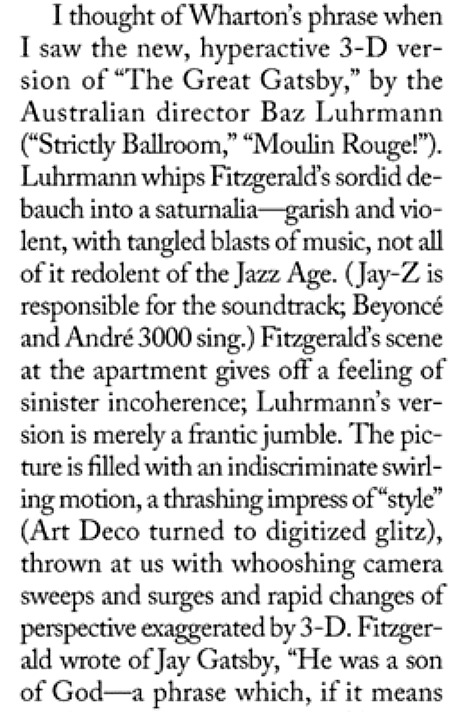