If Hillary Clinton defeats Barack Obama among the secular, deeply dug-in Pennsylvania Democrats by a lousy 10% margin, it’ll be meaningless. She has to tan his hide with a 20% victory margin or the chattering class will just shrug it off. A new Rasmussen Reports telephone survey in Pennsylvania shows Clinton leading Obama 49% to 39% right now, which reflects her favorable rating having dropped to 68% from 76% in the last survey. 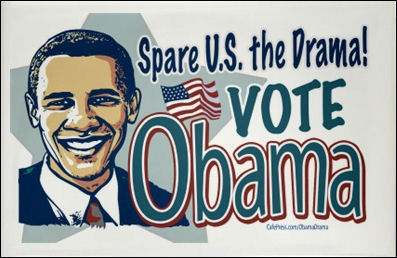 Meanwhile, N.Y. Times columnist Maureen Dowd has written in today’s (3.26) column that “some top Democrats are increasingly worried that the Clintons√É¬¢√¢‚Äö¬¨√¢‚Äû¬¢ divide-and-conquer strategy is nihilistic: Hillary or no democrat. Or, as one Democrat described it to ABC√É¬¢√¢‚Äö¬¨√¢‚Äû¬¢s Jake Tapper: Hillary is going for ‘the Tonya Harding option’ — if she can√É¬¢√¢‚Äö¬¨√¢‚Äû¬¢t get the gold, kneecap her rival.
“Even some Clinton loyalists are wondering aloud if the win-at-all-costs strategy of Hillary and Bill — which continued Tuesday when Hillary tried to drag Rev. Wright back into the spotlight — is designed to rough up Obama so badly and leave the party so riven that Obama will lose in November to John McCain.
Hence the ‘No drama, vote Obama’ placards and T-shirts that “are popping up at Obama rallies,” she writes, “with one of his military advisers [dubbing] him ‘No Shock Barack.'”
Here is one reported result of Hillary’s kitchen-sink tactics. May the vile karma that she’s created come back and swamp her life down the road.