Was Harvey the bad guy…again?

In a 3.25 piece called “How (and Why) Anthony Minghella‘s Talent Wasn’t Quite Fulfilled,” New York critic David Edelstein fingers Harvey Weinstein as…well, not quite the central villain in the life of the just-deceased British filmmaker, but some kind of messy meddler and spiritual usurper. 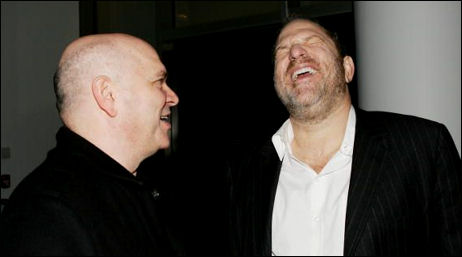 “Now that the shock of Anthony Minghella’s sudden death has dissipated slightly,” Edelstein begins, “I think it’s less unseemly to say that this brilliant and soulful filmmaker died unfulfilled. And I can’t help thinking that what happened has something to do with someone whose name rhymes with Shmarvey Shmeinstein.
“I am not remotely suggesting here that Minghella sold out and became a Hollywood hack: Every one of his films was an attempt to merge his own bold, socially committed sensibilities with the insistent demands of his shmasters. But why did he complete only six films (counting one in the can) in the eighteen years between Truly, Madly, Deeply and his death? Where were the gutsy little modestly budgeted movies — good or bad or uneven — that could have kept him rooted?
“Anthony Minghella was only 54 and might have had a quarter-century left to break new ground. His passing robs us of the movies he might have made and leaves behind a cautionary tale. It’s not that he was forced to make crap. It’s not that his movies were entirely mangled by big hairy paws. It’s that an artist who could have set an example for gutsy personal filmmaking surrendered his autonomy — as so many others have done — in the name of someone (or shmomeone) else’s ego.”
For what it’s worth, my sense of Minghella is that on some level he was at least half-comfortable with not being the most prolific filmmaker of all time. He was a beautiful man in many respects, but I think he liked to live well. He loved the aromas and textures and ecstasies of day-to-day living as much as (and perhaps a tiny bit more than) the rigors and tortures of creation.
For whatever reason Edelstein’s description of the Anthony-Harvey dynamic has reminded me of the relationship between Rod Steiger‘s Komarovsky and Omar Sharif‘s Yuri Zhivago.