Issues of quality and artistic merit aside, my Ray Walston Martian antennae readings are telling me that in terms of emotional mob-approval signals, Danny Boyle ‘s Slumdog Millionaire is beating out David Fincher‘s The Curious Case of Benjamin Button in the Best Picture contest as it currently stands. I’m just talking about a snapshot on a moving train, mind. Ten minutes from now we could be looking at different scenery. 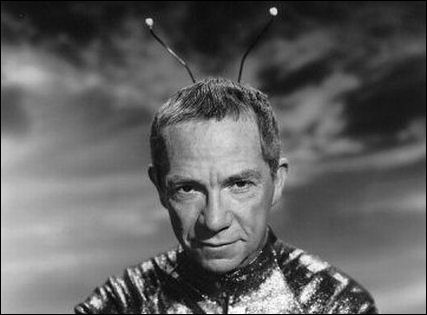 But it’s fair, right now, to make a spitball call and say that Millionaire might be taking over the front-runner position. No, it is taking over. A lot of folks are applauding, loving it (Real Geezers included) and telling their friends, and that’s the bottom line in this game.

I’m saying this based on the various meh reactions to Button that have been flying around for the last couple of weeks. The first high-profile, big-crowd Button screening happens tonight at L.A.’s DGA theatre, and the first big New York screening happens next Monday night so it’s obviously a little early to be making any firm calls. But so far I’m just not detecting any kind of “wow, blown away” reactions to the Fincher flick, although I’ve been told that one former big-time journalist is a huge fan. I’m sure there are others. I may be one as of next Monday evening.

I know that older, seemingly more thoughtful early-bird viewers have posted admiring comments about Button, and I’m certainly not writing it off. (Please understand that!) But the general rule-of-thumb is that any presumed Best Picture favorite has to have a detectable wave of emotional enthusiasm behind it, and for whatever reason — so far, at least — the middle-aged-men-getting-all-teary reactions to Button that were passed along a few weeks back haven’t manifested with the smarty-pants know-it-alls. Reactions have basically been “good but not great, no crying at the end, great technical achievement, beautiful photography, fine film,” etc.

And reactions like that are basically an “almost but no cigar.” A Best Picture winner has to be a manifestation of someone’s idea of a great, drop-dead, grand-or-penetrating-theme art film or it has to get people emotionally in a big way. Sorry, but them’s the rules.

I’m not even mentioning the measured reaction to Button that Oprah Winfrey conveyed when her Brad Pitt-Cate Blanchette Button special aired yesterday. Say what you will about Winfrey but she’s thought to be a kind of emotional geiger counter regarding the penetration power of certain movies and books, and a friend who caught the show thought it was significant that she used the words “fascinating” and “interesting” more than once to describe her reactions to Button. Make of this what you will.

In a way, it’s good for Button to be out of the font-runner slot. Now it doesn’t have anything to prove. Now it can sink or swim or soar based on what it is or isn’t, and what people are saying to each other on a day-by-day, screening-by-screening basis. And that’s fine.