“Does The Wolf of Wall Street condemn or celebrate? Is it meant to provoke disgust or envy? These may be, in the present phase of American civilization, distinctions without a meaningful difference behind them. If you walk away feeling empty and demoralized, worn down by the tackiness and aggression of the spectacle you have just witnessed, perhaps you truly appreciate the film’s critical ambitions. If, on the other hand, you ride out of the theater on a surge of adrenaline, intoxicated by its visual delights and visceral thrills, it’s possible you missed the point. The reverse could also be true. To quote another one of Mr. Scorsese’s magnetic, monstrous heroes, Jake LaMotta, that’s entertainment.” — final paragraph from A.O. Scott‘s conflicted rave in the 12.25 N.Y. Times. 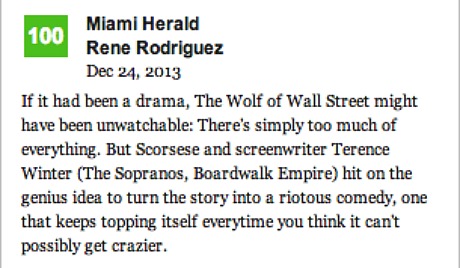 Opening graph: “Future archaeologists, digging through the digital and physical rubble of our long-gone civilization in search of reasons for its collapse, will be greatly helped if they unearth a file containing The Wolf of Wall Street, Martin Scorsese’s three-hour bacchanal of sex, drugs and conspicuous consumption. Then as now, the movie is likely to be the subject of intense scholarly debate: Does it offer a sustained and compelling diagnosis of the terminal pathology that afflicts us, or is it an especially florid symptom of the disease?”

First half of second graph: “From its opening sequence — a quick, nasty, unapologetic tour through its main character’s vices and compulsions, during which he crash-lands a helicopter on the grounds of his Long Island estate and (not simultaneously) shares cocaine with a call girl in an anatomically creative manner — to its raw, chaotic finish, The Wolf of Wall Street hums with vulgar, voyeuristic energy.”