The all-media screening of Chris Weitz‘s New Moon happens tonight on 42nd street. No plus-ones, I’ve been told. I wouldn’t normally run an excerpt of anything from the UK News of the World but this 11.17 review by Robbie Collin has an interesting passage in which he calls it “unnecessarily good.” 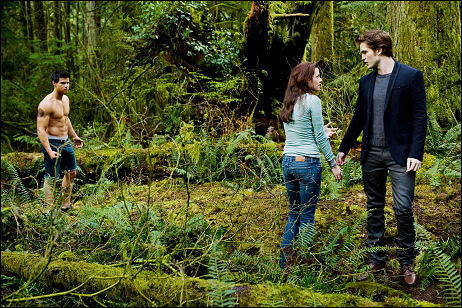 Weitz “kicks off with an eerie dream sequence that says more about the main characters in two minutes than the last Harry Potter film managed in two and a half hours,” he writes.

“In fact, special effects aside — which, by and large, are still a bit pony — New Moon grinds recent Potter efforts into the dust because it takes the time to flesh out its characters rather than just slamming them from one manufactured crisis to the next.”

“These are convincing, fully-rounded teenagers right here. They sulk, they stew, they agonize and they lust. They don’t run around playing kiss-chase in magic school.

New Moon is “a visually serious step up too. Weitz knows how to use pictures to tell a story — a pretty important skill for a director, you would think — but it means the film’s not bogged down with unnecessary chatter.

“Take a short scene in which three months pass, with the camera circling Bella as she sits by the window. Or the masterful chase sequence between the werewolves and bad vampire Victoria (Rachelle LeFevre) scored with a Thom Yorke track. Or the nicely-staged climax in Italy, complete with flashes of James Bond glamor and a predictably ace turn from Michael Sheen as vampire royalty Aro.”