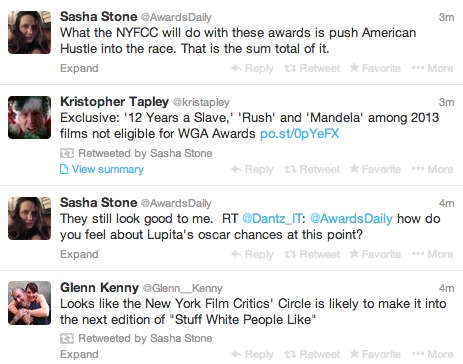 9:51 am: What about handing out a Special Best Bluray Aspect-Ratio Influence Award to Woody Allen for strongly endorsing the “boxy” 1.37:1 version of George Stevens‘ Shane while opposing the reviled (and so far unseen) 1.66 version? With perhaps…you know, a slight nod to Hollywood Elsewhere at the bottom of the page for asking Allen to step into the discussion? 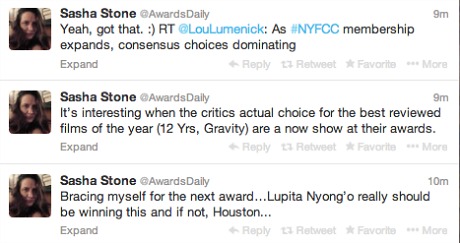 9:21 am: Dallas Buyer’s Club‘s Jared Leto has won for Best Supporting Actor — congrats! I would’ve figured this or Wolf of Wall Street‘s Jonah Hill. Does this and the Best Screenplay award going to American Hustle indicate Best Picture resistance to The Wolf of Wall Street? Feels that way.

9:17 am: Eric Singer and David O. Russell‘s screenplay for American Hustle hgs won the NYFCC’s Best Screenplay award. (I wouldn’t have predicted this — reactions to Hustle have been very respectful and approving but not through the roof.) Legendary documentarian documentarian Frederick Wiseman (whose most recent film is At Berkeley) was handed the NYFCC’s version of a Lifetime Achievement Award. The Wind Rises has won for Best Animated Film.

9:05 am: I overslept again. 8:45 am Pacific. Asian jet lag. My first groggy thought was how far along was the New York Film Critics Circle, which began deliberating around 7 am (10 am Eastern). Answer: Three categories — not very far. Sarah Polley‘s Stories We Tell has won for Best Non-Fiction Film (i.e., Best Documentary)….fine. Fruitvale Station‘s Ryan Coogler has won the Best First Film prize…yes. And a very enthusiastic endorsement for the NYFCC handing the Best Cinematography awaed to Inside Llewyn Davis‘s Bruno Delbonnel. Celebrating those exquisite desaturated capturings — swamps of time, hazy, grayish tint — is the right call.