I guess I’ve been so in love with Crowe-as-Moe that I didn’t “hear” the reports about Benicio del Toro having the inside track to play the role in the Farrelly brothers film. (I heard them physiologically but psychologically I flinched.) In any case, maybe Nashville-residing HE reader Brad Jones, who’s sent along an improved Photoshop image of the New Stooges, would consider doing a new one with Moe del Toro. 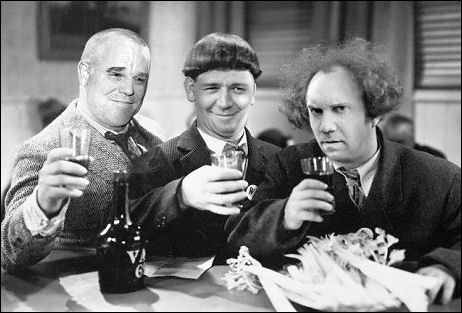 “I love the inspired casting choices you have mentioned for the new Stooges movie,” Jones wrote, “but yesteday’s photoshop image was for shit (as you noted). I couldn’t help but work one up this evening to get a little more accurate portrayal.

“But as I was inserting the different actors (brilliant choice with Crowe and Philip Seymour Hoffman), I kept seeing a different face for Larry. There’s no doubt that RDJ could pull it off, especially after his sardonic turn in Tropic Thunder, but I kept coming back to Paul Giamatti.

“Now before you dismiss take a look at the pic, remember the work he did in American Splendor, and forget that he’s been cast in every other movie over the last two years. He just fits, doesn’t he?

“No matter the Larry choice, the Farrely’s had better not puss out and go with the likes of Seann William Scott, Jason Biggs or anyone of that ilk.”