The Criterion Bluray of Albert and David Maysles‘ Gimme Shelter, the legendary doc about the 1969 Rolling Stones tour that ended with violence and death at the 12.6.69 Altamont Speedway concert, struck me as an overpriced burn. It’s a typical Criterion-level high-quality package as far as it goes, but it’s not worth $40 because it doesn’t look all that different from the last DVD, which was issued in 2000 and was clearly an upgrade at the time and looked pretty good on my Sony 36″ analog flatscreen.. 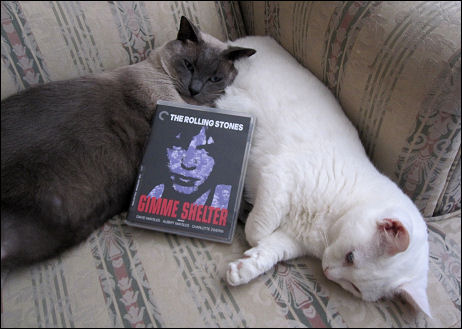 Gimme Shelter was originally shot on 16mm so it can only look so good — I understand that. But when you pay $40 bucks you want a little of that ring-a-ding-ding eye-pop schwing, and Criterion’s high-def mastering just doesn’t deliver. It looks good but not “oh, mama.” You could pop in that same nine year-old DVD into your Bluray player and not, I’m betting, see any discernible difference. Or so my recollection is telling me.

Maybe I’m wrong, but I know I was underwhelmed the second I started watching the Criterion Blu-ray. My first thought was, “This?”

I don’t have an amplified stereo system connected to my Bluray player but the sound that came out of my Panasonic plasma speakers sounded murky and distorted and basically unpleasant. Yes, I know — DTS HD Master Audio with surround and stereo mixes, and it sounds like shit.

I was able to detect visual improvement in WHV’s Bluray of Michael Wadleigh‘s Woodstock, which was also shot on 16mm, but not at all here.

Amazon says that the regular DVD version of this Criterion release is going for $30. Even that is too much for what you get.

And of course I had to go to Wikipedia Gimme Shelter page to learn some stuff I never knew. 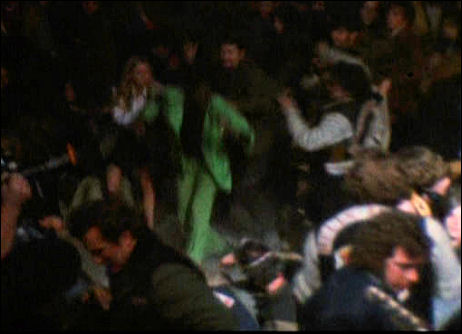 Frame capture from Gimme Shelter of Meredith Hunter (dressed in green) a millisecond before he was stabbed at the Altamont concert by Alan Passaro (directly to Hunter’s left).

The Grateful Dead are filmed as they approach the Altamont fairgrounds and are told by Santana’s Mike Shrieve that some members of Hells Angels, the California motorcycle gang hired by concert organizers as security guards, have been beating up onlookers and musicians alike (including the Jefferson Airplane’s Marty Balin, who was knocked unconscious) — but you’d never know from the Criterion Bluray.DVD that the Dead declined to play because of this.

Amy Taubin‘s essay reports that four people died during the Altamont concert, but she doesn’t mention that aside from the stabbing of Meredith Hunter by a Hells Angel that the other three deaths were accidental — two by a hit-and-run car accident and one by drowning in an irrigation canal.

You’d also never know that Alan Passaro, the Angel who stabbed and killed Hunter, was found not guilty of murder due to a claim of self-defense. You also wouldn’t know that Passaro was found dead in 1985, floating in Santa Clara’s Anderson Reservoir with $10,000 in his pocket. (Wikipedia reports that “foul play was initially suspected but was never confirmed” — hilarious!)