Following last night’s Berlinale screening of Sophie Hyde‘s Good Luck To You, Leo Grande, Emma Thompson, who plays Nancy, a 62 year-old woman (like Thompson) who hires a sex worker (Daryl McCormack) to get her ya-ya’s out, discussed performing a full-frontal nude scene.

“It was hard“, Thompson said during a Berlinale press conference. “This is homework for all of you. We’re only used to seeing bodies that have, you know, been trained…I knew that Nancy wouldn’t go to the gym. She would have a normal body of a 62-year-old woman who’s had two children. 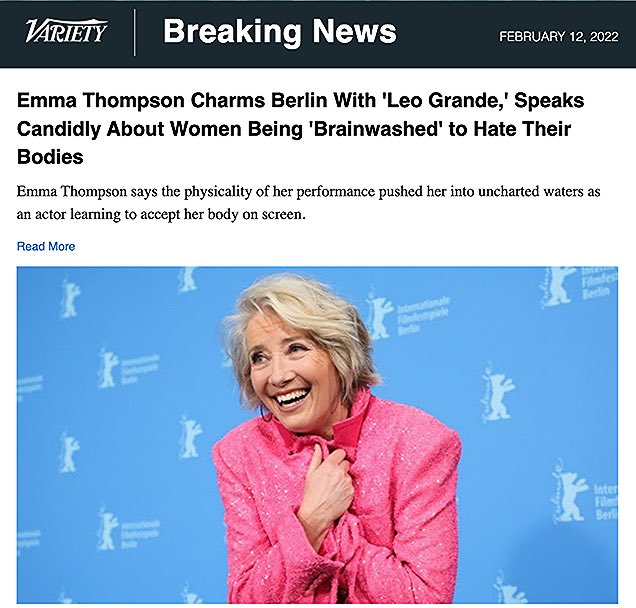 “So you try. You try standing in front of the mirror and don’t move. Don’t move. Just accept it — just accept it, and don’t judge it. That’s the hardest thing I’ve ever had to do. I’ve done something I’ve never done as an actor.”

HE to Thompson #1: You’re contradicting yourself here. On one hand you’re saying that staring at your buck-naked 62 year-old bod is “horrifying,” but the reason is because of the “brainwashing” that we’ve all been subjected to by advertising, movies and TV shows. I don’t happen to believe that my own bod is horrifying or even distressing, but I can imagine being less than pleased with my physical self 10 or 20 years hence, especially if I stop going to the gym. Most of us understand that bodies which have gone to seed are dismaying all on their own — no “brainwashing” is needed to complete the lamentable fact.

HE to Thompson #2: Nobody who’s seen better naked days ever stands in front of a mirror and just stares…nobody. I didn’t do this even when I was in my absolute prime (i.e., late teens, 20s, 30s). I gave myself a quick glance or two but I never stared…not once. So why the hell would a 62 year-old do this, and why the hell would a director of a movie want an audience to contemplate an older, saggier bod? To what end? Who needs it? Answer: No one.

The trim and tanned Cary Grant was 62 when he made his final film, Walk, Don’t Run (’66). He was one of the best-looking, most-in-shape older males on the planet at that time, and there’s no way he would’ve shot a scene in which he stands in front of a mirror and studies his 62-year-old bod, even if he was wearing swim trunks or gym shorts. No way. Because (again) people never do this, and an audience would rather watch the 50ish Grant with his shirt off in North by Northwest or To Catch A Thief, because he looked better then.

My point, I suppose, is that Sophie Hyde…well, who knows what she was thinking? But if you ask me shooting an MCU of a full-frontal, present-tense Thompson was an act of sadism. To me anyway. Or exploitation. Or even cruelty.

February 12, 2022by Jeffrey WellsNo Comments
« Previous post
What The Academy Has Recently Liked
Next post »
“Jeremy, You’ve Been Traded to the Phillies”