No Reservations (Warner Bros., 7.27) had a nationwide sneak last night, so it’s fair game to write about it. Except I don’t know what to say. It’s one of the most puzzling “meh” movies I’ve ever seen. It didn’t do anything to me or for me. I didn’t hate it, love it or like it that much — I just sat there, waiting and watching and hoping for something to happen, checking my watch two or three times as I sat slumped and vaguely sneering. And then it ended. And then the audience clapped for three or four seconds. 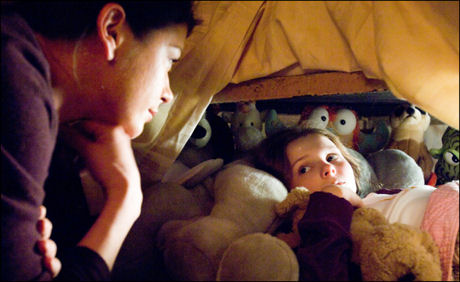 It tells a nice-enough love story about a selfish, hard-wired chef (Catherine Zeta Jones) gradually falling for her deceased sister’s daughter (Abigail Breslin) and — we all know the drill — becoming a better, less neurotic, more emotionally giving person. Her growth arc happens with the help of an amorous good-guy chef (Aaron Eckhart) whom she otherwise sees as a threat due to his having been hired at the West Village restaurant where she works, hence making her feel irate and threatened, because he’s warmer and more nurturing with Breslin than she is.
I know this story chapter and verse, having seen the 2002 German film that No Reservations is based upon — Sandra Nettlebeck‘s Mostly Martha — two or three times. It became a favorite among upmarket moviegoers, hip foodies and the like. Here’s my original review.
The problem is that No Reservations is a touchy-feely-foodie movie that won’t let you feel anything. Director Scott Hicks has delivered a pro-level job — well paced, smoothly composed, agreeably acted (except for two performances) — but nothing happens. And absorbing this strange nothingness is a very weird deal. You’re watching a “heart” movie that says all the right things about parenting, love and great food, and it’s all rote and bloodless — a movie going through the paces. 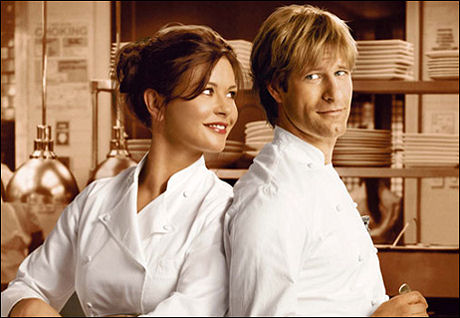 I might as well just say it — Catherine Zeta Jones sinks this movie. She plays a brittle, bitchy, control-freak chef with pronounced anger issues, and there’s just no warming up to her. I didn’t like her from the get-go, although I felt much differently about the same character when she was played by Martina Gedeck in the ’02 version. I don’t want to go out on a limb but this may have something to do with Zeta Jones not having the chops or emotional range to handle a part like this. She’s a costar, not a star. And she always plays selfish avaricious types who have no regrets about their natures. Here she’s trying to sell regret, and it’s a no-go.
The reason I couldn’t get into her performance last night is that I believe that I know who Catherine Zeta Jones is, and her acting did nothing to change this opinion. I think she’s basically an operator who plays selfish bitches in movies (the drug dealer’s wife in Traffic, the gold-digger in Intolerable Cruelty, the floozy in Chicago) and who’s made some profitable deals off-screen — that T-Mobile thing, selling kid photos to the tabs, marrying Michael Douglas. A lawyer friend I know calls her a “capitalist pig.” That’s a little harsh. She’s just one of those women who want what they want and get it.
The other bad performance in this film is from Bob Balaban, who plays CZJ’s therapist. He’s the one who says, “The best recipes are…” No, I can’t say it, can’t repeat it. But it’s absolutely one of the worst lines ever written. It’s so on-the-nose if makes you want to jump in front of a cab. 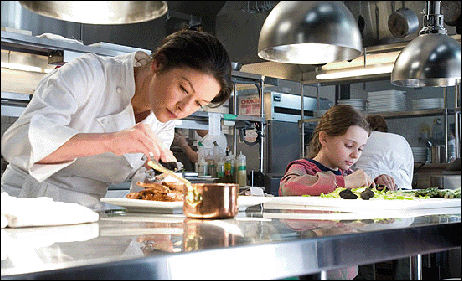 I wrote this five years ago: “Far from radical or earth-shaking, Mostly Martha won me over partly because it does no more than take a familiar situation — an egotistic single person suddenly saddled with the responsibilities of parenthood — and twist it around some. It’s basically a culinary Kramer vs. Kramer with a European mood, a subplot about romantic love, and a delightful emphasis on the preparing of exquisite food. I’m thinking, in fact, it may be the most succulent, sensually appetizing, food-trip movie since Big Night or even Babette’s Feast.”
This is an accurate description of what No Reservations is, and at the same time is not. It has all this great-looking food, but the aromas and tastes just aren’t there.
Aaron Eckhart is okay as the chef boyfriend, but Sergio Castellitto was far more engaging in the German version. Charm is a hard thing to quantify or manufacture, but when a person has it, you know it.