The Toronto Star‘s Peter Howell has bravely compared Gone With The Wind, a metaphor about the miseries and deprivations of the Great Depression of the 1930s (and a comment about how the nicest people aren’t necessarily the ones who do well in tough times, and vice versa) with New Moon, a stunningly dull and tension-less Mormon metaphor about just saying no to pre-marital sex. 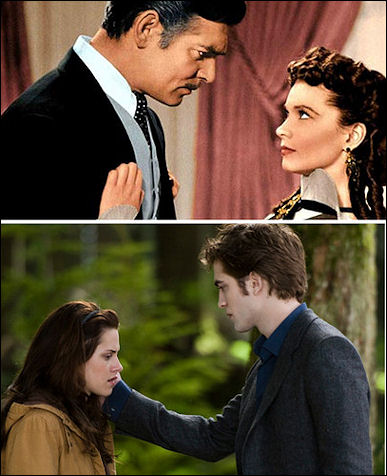 Howell is one of the nicest and smartest guys I know and one of the best film critics bar none, but this article is…uhm, unpersuasive. To me, anyway.

Howell actually calls New Moon a “well made, competently acted” thing that “properly complements the Twilight book series.” It’s “not one of the year’s best movies,” he allows, “but it’s a far cry from the worst.” And the critical slamming of it, he suggests, was due to “the same sexism that prompted many critics to dismiss Sex and the City completely out of hand, simply because it was perceived to be a movie for women, and thus not a movie to be taken at all seriously.”

Nope, wrong. It’s not that New Moon is aimed at women — it’s the obvious fact that Catherine Hardwicke‘s Twilight, released a year ago, did a much better job of tapping into the panting Bella Swan + Edward Cullen current than Chris Weitz did in New Moon. Much. As in don’t even compare them. It’s not that New Moon is too girly and swoony — it’s not girly and swoony enough.

On top of which Howell totally ignores the ghastly season-changing sequence in New Moon that became an instant laughing stock — one of the stupidest such sequences in motion picture history.

The fact that title cards indicating the passing end-of-the-year months were deemed necessary to insert (presumably due to test-screening reactions from Eloi audiences that indicated confusion about why the front lawn had changed color and was thereafter covered with leaves and then snow) is one of the most persuasive and depressing indications that there are some amazingly stupid people out there.

Howell not even mentioning this sequence, which film professors will be showing to their students for decades to come as an indication of societal rot and collapse, completely destroys his other arguments. It’s too glaring and too comical to be brushed under the rug, and failing to at least acknowledge it when a writer is laboring to defend New Moon means that attention isn’t being paid.

And I for one didn’t rip the Sex and the City movie because, as Howell suggests, “it was aimed at women and therefore not to be taken seriously.” I was morally offended by that film. I called it “a grotesque and putrid valentine to the insipid ‘me, my lifestyle and my accessories’ chick culture of the early 21st Century.” I didn’t call it a movie that Satan himself would have been proud to have directed, but I should have.

“The soul of this movie is infected with gross materialism, the flaunting of me-me egos and the endless nurturing of the characters’ greed and/or sense of entitlement,” I said. “It’s all about money to piss away and flashy things to wear and lush places where the the girls lunch and exchange dreary confessional chit-chat. And this, mind you, is where millions of middle-class women in every semi-developed country around the globe live in their dreams. They’re going to this movie right now in multitudes. Sad. Really sad. Because SATC is crap through and through.

“A few items back I called Sex and the City a Taliban recruitment film. All I know is that I felt ashamed, sitting in a Paris movie theatre, that this film, right now, is portraying middle-class female American values, and that this somehow reflects upon the country that I love and care deeply about. It’s a kind of advertisement for the cultural shallowness that’s been spreading like the plague for years, and for what young American womanhood seems to be currently about — what it wants, cherishes, pines for. Not so much the realizing of intriguing ambitions or creative dreams as much as wallowing in consumption as the girls cackle and toss back Margaritas.

“All I know is that the faux-splendor of the movie — the insipid Marie Antoinette-ishness of the damn thing with the look-at-me clothes and sets and nouveau-riche ickiness of the apartments and restaurants — felt to me like a kind of hell.”