The reason for Dennis Lim‘s career-review article about director Abel Ferrara in today’s N.Y. Times is — wait three years for it — the 10.17 opening of Ferrara’s Mary at the Anthology Film Archives. 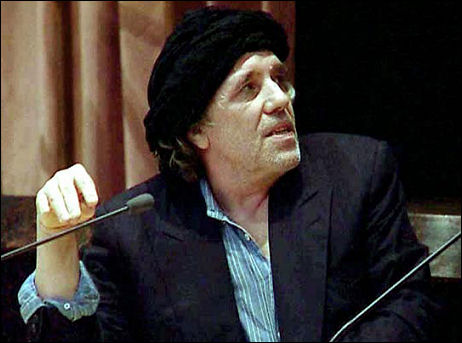 A compressed, probing, well-ordered drama about eroding values and the lure of mystical transformation, Mary — which stars Juliette Binoche, Forest Whitaker, Matthew Modine, Heather Graham and Marion Cotillard — was completed and began to be shown three years ago. No U.S. distributor wanted it. That’s not fair or correct in a sense. I wrote during the ’05 Toronto Film Festival, which showed Mary early on, that it’s “Ferrara’s best film since Bad Lieutenant.” Which I still stand by.
“For more than a decade now [Ferrara’s] movies have gone largely unseen in the United States,” Lim says, noting thatThe Funeral (’96) was the last to receive a decent release.” Ferrara “moved to Rome for a few years after the 9.11 attacks,” he reports, in part because “it was easier for him to find financing in Europe.”
But “he has been working almost nonstop [and] remains a fixture at the biggest European festivals, and his recent movies, among his most fiercely personal, hardly seem the product of a discouraged artist.”
I’m discouraged, however, about the absolute refusal of anyone in the extended Abel Ferrara family (including film critic admirers like Lim) to even mention — much less call for the showing of — a likably loose and flavorful documentary called Abel Ferrara: Not Guilty, by European director Rafi Pitts. 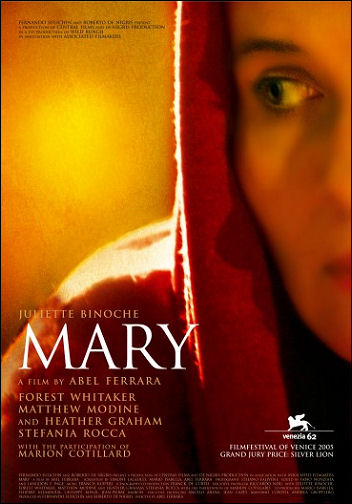 I saw this made-for-TV doc five years ago at the Locarno Film Festival, and there hasn’t been a whisper about it since. No articles, no film festival showings, no DVD or online downloads, no esoteric-movie-channel cable airings…nothing. And nobody will talk about it. But this doc is one of the reasons I really love Ferrara.
Here’s my review, which appeared in my Movie Poop Shoot column in August ’03:
“My Locarno viewing got off to a lewd, boisterous start with Abel Ferrara: Not Guilty, a video documentary by French filmmaker Rafi Pitts.
“It doesn’t attempt an in-depth probing of a filmmaker’s career and aesthetics by the usual means — searching questions put to the director, a comprehensive array of clips, talking heads offering insightful assessments, etc. Pitts just follows Ferrara around New York — shooting the shit, filming some kind of music video, visiting and hosting friends, talking to women on the street, tossing off anecdotes about Harvey Keitel, Christopher Walken and Willem Dafoe (the stars of Ferrara’s Bad Lieutenant, King of New York and New Rose Hotel) — and lets him be himself.
“‘I knew that an interview situation wasn’t going to give us any new information about Abel,’ Pitts told the Pardo News, the local festival rag. ‘The best way to portray him was to show him how he is. The film is always from his point of view. He’s always in the shot.’ And it’s a cool ride. A wonderfully messy, slipshod, organically alive New York hoot.
“The festival program notes on this film describe Ferrara as ‘deranged,’ which I think is a little harsh. He comes off as a nutter, all right, but one deserving of respect. What comes through is a portrait of an anarchic creative teenager with the soul and finesse of a 51 year-old. 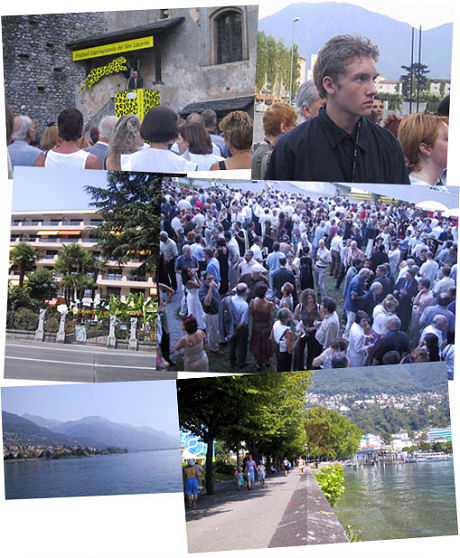 Locarno Film festival montage that accompanied one of my columns from the ’03 gathering.

“A gnomish, stooped-over figure with longish graying hair in a leather jacket and a pink New York Yankees baseball cap, Ferrara is full of hyper, rambunctious energy. He plays guitar and piano (not too badly) and he loves to tell stories in one of those fuck-this, fuck-that Manhattan voices we’re all familiar with.
“An actor friend observes at one point Ferrara tends to do four or five things at the same time, and each one with distinction. It’s clear he likes to solve creative problems by immersing himself in chaos and sorting things out as he goes along.
“It’s also clear he knows from movies, and precisely what’s good and what’s not. He’s goes into a kind of frenzy when he’s working, and you can see why certain films of his (Bad Lieutenant and King of New York, certainly) work as well as they do and why, at the same time, constipated producer types might feel a little intimidated by him.
“But he’s great with actors and catching excitement on the fly. Bronx-born and quick with a quip, Ferrara loves taking cabs all over town and talking shit with people he runs into. There’s a great moment when he spots a long-legged brunette walking nearby and starts walking after her, making cracks like ‘tall…and that’s not all!’ and ‘those boots were made for walkin’!’
“I have one beef about the film. Ferrara was one of the eleven filmmakers hired by Canal Plus to shoot a short film for 11.9.01, the compilation piece about reactions to the World Trade Center attacks, but was fired, he says, because the producers ‘thought my ideas about the piece were dangerous.’ He doesn’t explain what these ideas were, and I think Pitts should have gotten him to cough up.
“Ferrara is a funny, charismatic, fascinating guy. He doesn’t hide his tendency to drink beer all the time from the camera, and he’s probably going to have a lot of friends tell him he should invest in some dental work after this film gets around. But that’s the honesty of this thing. This is who I am, exuberance and all, and fuck it if it’s not what you’d prefer.
“At one point Ferrara tells a woman he meets on the street that he’s being followed around by a video crew because it’s his last day on earth, and it occurred to me this is precisely the attitude he seems to bring to living his life.”