One of the perks of attending college in London is flying cheap to Europe via Ryan Air. So it fits the paradigm that Jett, currently enrolled at Syracuse University’s London annex for the fall semester, and his roommate Kyle Burda are off to Prague and Budapest next weekend. I’ve been to Prague three times — in ’87, ’92 and ’00 — so I sent Jett some photos this weekend and suggested some places he might want to visit. 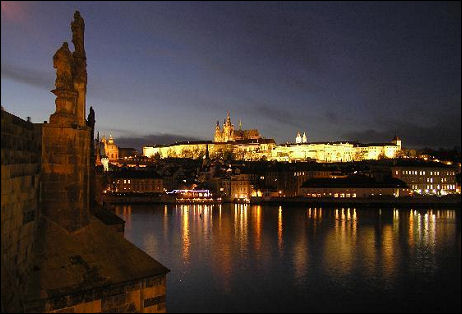 Anyway, this all reminded me of a wild train-trip drama during my first trip there, which happened six months before the election of Bill Clinton. I had attended my first Cannes Film Festival that year (reporting for Entertainment Weekly) and would later visit Cortina d’Ampezzo and the outdoor sets of Cliffhanger for a Sylvester Stallone profile for the New York Times.
I took a train from Nice to Genova, Italy, and then switched to another heading for Prague. But an hour or so into the trip I realized the train was headed for Berlin and not Prague — I’d read the sign wrong. So I got off in Leipzig around 10 pm in order to catch a 2:45 am Leipzig-to-Prague sleeper. I was feeling whipped and unclean so I booked a hotel room to use it for three hours, long enough for a shower and a 90-minute nap.
I was back at the Leipzig bahnhof by 2:15 am. I bought a bunk on the Prague train and crashed in a sleeping compartment as soon as the train pulled out. Somebody had told me to be careful about sleeping-car thievery so I put my wallet (which had about $50 in Italian lira plus American Express traveller’s checks) under my pillow.
Right around dawn, or roughly 2 and 1/2 hours after we left Leipzig, I was awakened by sounds of shouting and agitation. Young women’s voices, one of them shrieking. The first thing I noticed after my head cleared was my wallet sitting on the floor — empty, cleaned out. We’d all been hit. 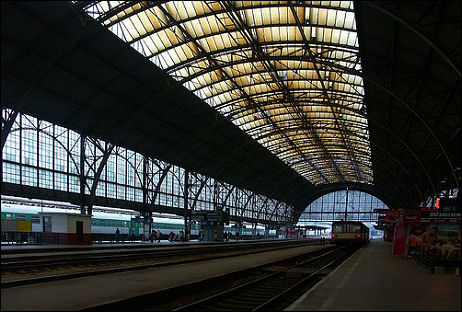 I got up, ran out and began talking with a group of British high-school girls who were travelling to Prague with a couple of male instructors. More people came up to us, alarmed, anxious. A team of thieves, we quickly deduced, had crept into several sleeping compartments (which didn’t lock from the inside) in the dark, one after another, and taken all they could carry. And the poor British girls had been carrying nothing but cash.
But how long ago?, we asked each other. The train was moving so the baddies must still be on board, right? We started running from car to car, looking for help.
Then more shouting. The thieves, we were told, had been hunted down and were now huddled in one of the first-class compartments, protecting themselves from enraged victims who had chased and were now surrounding them, locking them in, taking them prisoner. Everyone in our group began running in that direction. Vigilante justice! Everyone enraged, determined, acting and thinking as one.
We came upon a beefy, red-faced German train conductor and pounced on him, demanding in a mixture of English, German and Esperanto that he call the authorities and have them meet the train at the next stop so the thieves could be arrested. But the conductor, a lifelong veteran of East German socialism, was terrified at the idea of taking the initiative. I speak no German, but it was obvious from his squealing voice — the guy literally resembled Porky Pig — that he didn’t want to go up against a team of possibly armed thugs. Leave me alone!
So to show Porky we meant business somebody — one of the victims, I mean — pulled the emergency cord and stopped the train. If the train crew won’t act the train won’t move! The thieves will be busted or else! 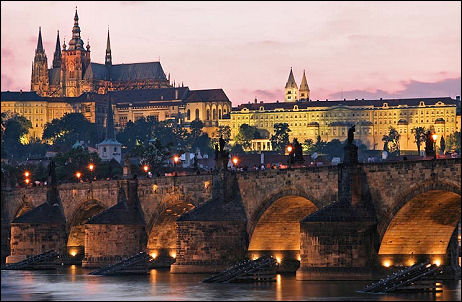 But less than a minute after the train slammed to a halt came more shouting. We all ran up to the first-class car where the thieves had been held only to hear they’d opened the windows and doors and jumped out and run into the forest, which was dark and damp-looking and dense with pine trees.
But about 150 feet into the forest the thieves had stopped and turned and just stood there in a group, smoking cigarettes and defying their victims to run after them. Nobody did. Nobody knew if they had weapons or what. Everybody (myself included) wimped out. The thieves looked like shifty-gypsy types — dark eyes, dark hair, moustaches, scruffy, heavyish, not young.
So that was that. I was out only 50 bucks but the British girls’ Prague vacation had been ruined. I had kept my stubs and got some fresh checks back from a local American Express office by the end of the day.
A little voice inside is telling me I wrote about this before, but I can’t find it if I did.