Not In The Cards

Sony Home Video’s The Guns of Navarone Bluray streets on 10.18. It’ll look more robust and detailed than the various DVD versions, I’m sure, but according to a 9.29 Home Theatre Forum riff by restoration guru Robert Harris, this 1961 war film can only look as good as its appalling preservation history allows. 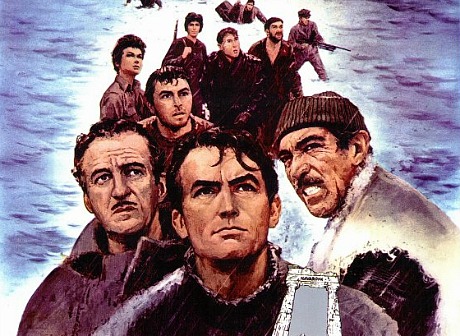 “To the best of my knowledge, The Guns of Navarone was photographed on the new Eastman 5250 stock, the first to have high level anti-dye fade characteristics,” Harris writes. “My comments are personal opinion, and some may disagree, but here goes.

“The film was a UK production, with some photography in Greece and L.A. Had a decision been made to have the original negative processed by Technicolor London, Technicolor Hollywood or any other high-end lab, Columbia wouldn’t be facing many of the problems they do today. Since dye transfer prints were produced, as well as at least a small number of 70mm blow-ups, why not allow the lab doing the printing to handle the production all the way through?

“Presumably based upon a studio contract, the processing work was given to Movielab, which is a couple of steps above forcing the professional photographer shooting your wedding photos to drop his exposed film through a slot at the local Uncle Joe’s Ribs, Photo Lab & Storm Door Company.

“I’m unaware of the production of separation masters to protect the show.

“In 1989, Columbia went to UCLA for aid to save the film, and archivist Robert Gitt performed the necessary tasks to the best of analogue abilities. The final result at least stabilized the image problems, while protecting the original mag tracks.

“Two decades later, a return to the original surviving elements in 4k was in order.

“But such a return doesn’t guarantee the superb image that this film could have had, had everything been done correctly back in 1961.

“As I recall, the final reel of original negative may also be missing. Dupes are built in throughout, and color, for the most part is, well… acceptable.

“I’m taking the long way around to make the point that there is nothing further that can be done to make the film look any better. And everything goes back to those early decisions.

“Pretty much as the knowledgeable eye would think. Grainy in parts, occasional contrast problems along with optical anomalies, plus what some here will refer to as ‘force fields’ around certain objects, normally in high to low contrast situations. Flesh tones range from decent to awkward brownish green with red highlights.

“And there is very little that can be done about it.

“The technical folks at Sony/Columbia have used all the tools at their disposal, but one cannot make a proverbial silk purse from old Eastman stock processed by Movielab.

“And there you have it.

“This is a terrific and important film, that happens to be beautifully acted and is extremely entertaining.

“But the point needs to be made that not only does this Blu-ray not look like a new film, it isn’t going to look like what many will perceive a high quality, important 1961 production should look like. Know that going in, and enjoy the show, and you won’t be disappointed.

Wells comment: I won’t be seeing the Navarone Bluray until I return to Los Angeles this weekend, but this sounds like a situation that requires a little tasteful DNRing. When you buy a Bluray you want that extra quality, and if the film itself doesn’t have this, you need to digitally crank it up.