It’s been announced that Cannes Classics will host the world premiere of an unrestored 70mm print of Stanley Kubrick’s 2001: A Space Odyssey on Saturday, 5.12.18, in the midst of the forthcoming Cannes Film Festival.

A new but not restored 70mm print of 2001, struck from “new printing elements made from the original camera negative”, will be shown. An official festival release says that the idea is to “present the cinematic event audiences experienced 50 years ago.” The 70mm Cannes print, created by Warner Bros. with supervision by director Chris Nolan (who will introduce the film at the special Cannes screening), “is a true photochemical film recreation — no digital tricks, remastered effects or revisionist edits.” 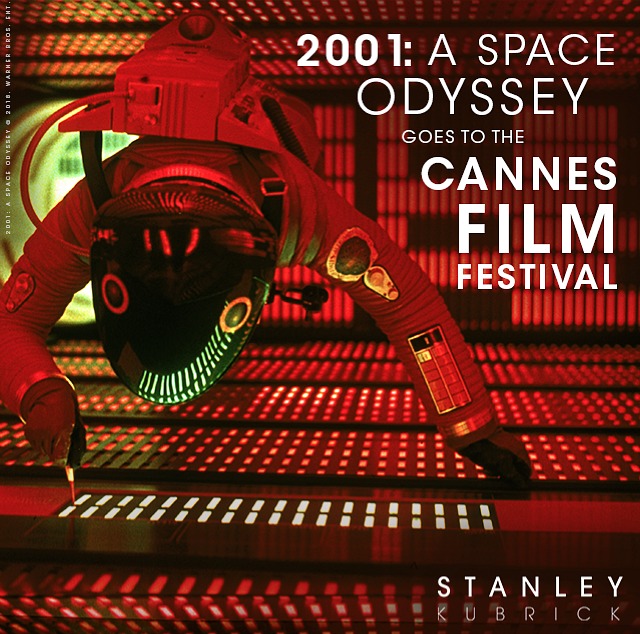 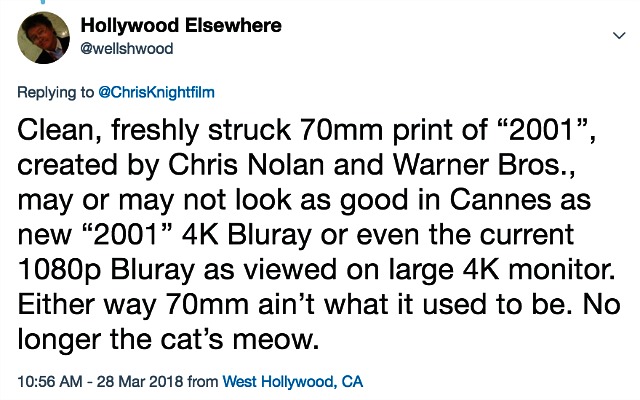 The new 70mm print they’ll be showing in Cannes “will not look like 2001 did in 1968,” Harris claims. “My problems with the project are not with what’s being done, or how it’s being done. It’s with the verbiage of the press release. It can’t be an authentic recreation of how the film looked 50 years ago for any number of reasons. Color stocks, black levels and grain structure are different now, color temperature of the lamps has changed but can be adapted. They were using carbon arc lamps in ’68 and they aren’t now, and on top of everything else the film stock is different — the stock used for original prints was a stock that arrived back in 1962. And so the images will ironically look too clear.”

(Harris is speculating, for example, that Cannes audiences might see that Dr. Heywood Floyd‘s floating pen is actually mounted on a circular piece of lucite or glass, which the original ’68 film didn’t have the resolution to deliver.)

“All of that noted, stocks are so good today that the fact that a print is fourth-generation may not matter.”

Final Harris thought: The promising news is that FotoKem, the lab producing the elements, does superb work, so in the end everything should look wonderful, if a bit shop-worn. Most important thing is that the skies must be black, black, black!”