My cryptic, sometimes emotionally brusque father went through a lot of bad stuff as a Marine Lieutenant in the South Pacific (Guam, Iwo Jima) during World War II, so you’d think I’d be at least half interested in HBO’s The Pacific, which will debut on Sunday, 3.14. 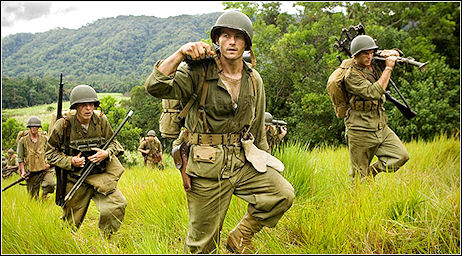 Curiously, or perhaps not so curiously, I’m not. Maybe because I’d rather not contemplate the source of many of my own emotional difficulties that came about due to my dad’s combat-influenced nature and personality (which included booze until he went into the program in the mid ’70s). That or there’s something about US-soldiers-vs-the-Japanese movies that I’ve never found very compelling. I can think of three exceptions: The Thin Red Line, The Bridge on the River Kwai, Heaven Knows Mr. Allison. Or maybe it’s just something to do with the Pacific region and malaria and spindly coconut trees and tall grass and crazy Japanese soldiers holed up in caves. I don’t know exactly.

That said, Alessandra Stanley‘s NY Times review of what I presume is the first two or three episodes sounds encouraging.

Barack and Michelle Obama hosted The Pacific producers Tom Hanks and Steven Spielberg plus some HBO brass and Congresspersons and whomever else for a White House screening last night.

It would be wonderful to read in a Bob Woodward book some day that Obama took Spielberg off to a corner and said, “So what’s this I hear about you pussying out like a little girl with your Abraham Lincoln movie? I’m a Lincoln man from way back and I don’t get it. What, are you afraid of making another Amistad-type film and people shitting all over you…is that it? Let me tell you something. People have been shitting on you for years already for wimping out on this thing. I read Hollywood Elsewhere and I know what goes. And now you can add me to the agitate roster.

“I know you were a big Hilary supporter to begin with so let’s not crap around. Full disclosure and all that but I’m going to do what I can to shame you and if necessary fuck you up in any way I can in order to persuade you to pull the trigger on this movie. Are we clear on this? Fine. You didn’t know I was liike this, did you? Well, it’s a well-kept secret, I guess. Talk to me in private and I’m Lyndon Johnson. Or I’m starting to be him, I think. A change is coming over — I can feel it.”