13 months ago Michael Cera, the 19 year-old costar of the just-opened Superbad, was suddenly the Guy of the Moment — a cool new GenY talent who embodied a very dry, droll and witty comic mentality, which was also evident in Clark and Michael, his co-created web series. And yet today — don’t laugh — I’m getting a feeling that Cera may be two or three steps from being over. 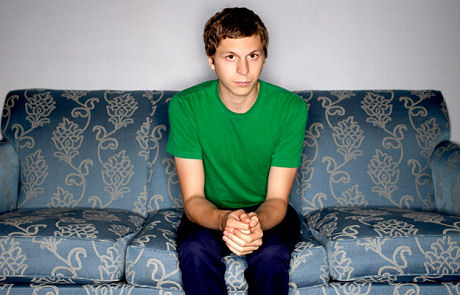 I’m not saying this is in the cards, and I’m not saying I don’t enjoy Cera’s comic sensibility — I do. But if he is in fact on the brink of being over (which is to say completely done within two or three years), the two main reasons are (a) he’s already repeating himself and (b) his aversion to being famous, hard to swallow from a guy who’s been acting since he was 10 or 11 years old, is profoundly tiresome. Nobody has time for that sensitive “poor me because I’m rich and famous” shit. I don’t, I can tell you.
Three months after Superbad opened — early September, or a little more than a year ago — Juno played the Telluride Film Festival and there was Cera again, playing more or less the same Superbad character but without Jonah Hill to play off and minus the great rapier-wit lines. And then his latest film, Nick and Norah’s Infinite Playlist (Sony, 10.3), played the Toronto Film Festival, and again people — okay, a big-city critic-journalist I spoke with just before travelling to Toronto — said Cera is more or less playing the Superbad guy again and that he needs to expand his repertoire.
When I passed this observation along to some journalists friends at the beginning of the festival, one of them joked about Cera,”That settles it — we need to take this guy down.”
I’m not trying to take Cera or anyone else down, but I am saying — observing — that the window of coolness and hotness seems to be getting shorter and shorter these days, and that Cera may soon find himself a victim of this syndrome. If he doesn’t pull something new out of his hat, I mean. The fact that one guy has already begun to tire of Cera’s act may sound ludicrous, but it also suggests that perhaps he is playing the same tune over and over. 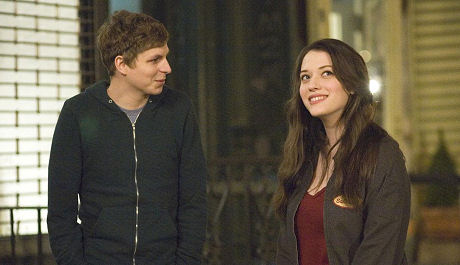 I’m not voicing this view myself (I haven’t seen Nick and Norah’s Infinite Playlist and I personally can’t wait for Youth in Revolt) but…well, I did begin to think this a little bit when I saw Cera in Juno. I said to myself, “Okay, fine, whatever…this again.” I’m presuming others had this thought, no?
Now comes a N.Y. Times interview, conducted and written by Katrina Onstad during the Toronto Film Festival, in which Cera “sat rod straight and used the phrase ‘I don’t know’ 48 times in one hour.” Being a veteran of hundreds of interviews, I can tell you that a person who says “I don’t know” once or twice during a chat is most likely just being frank, but a guy who says it 48 times is — trust me — being deliberately obstinate.
“I don’t really want to be famous, and I’m kind of scared that might be happening,” Cera told Onstad. “I might really have to stop and think before I make decisions now, and see how they’re going to affect my life, and see if it’s what I want to be doing with my life. I guess I need to make sure that it’s worth all that comes with it.”
I have to be honest and admit that my first reaction when I read the above was, “That’s it — he’s written his epitaph.” But then I remembered that this is the same thing Leonardo DiCaprio was saying in the wake of Titanic and that he eventually got past that, so maybe Cera will also. Or maybe he’ll quit acting down the road and become a director-writer-producer — i.e., the next Judd Apatow. But I do feel some kind of downshift coming a year or two hence.
A guy who’s starred or co-starred in two movies that made $143 million and $121 million in the same year (i.e., Superbad and Juno) has built up loads of credit and good will, but sooner or later the world gives the hook to repetitive weenies.