A friend I just spoke to was under the impression I was half-and-half on WALL*E. Not in the least, I said. I’m an unamibiguous admirer top to bottom and start to finish. It’s a masterpiece of its type. It’s going to win the Best Animated Feature Oscar. I understand the impulse on the part of director Andrew Stanton to call it a robot love story and leave it at that, but it’s a lie, of course — a disinforming of pig-trough moviegoers who might think twice about going to a “green” movie that satirizes their lie-around, fat-ass lifestyle. 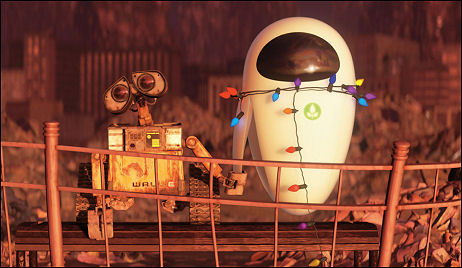 The plan seems to be working because WALL*E is going to make a lot of money this weekend. Between $52 and $57 million, according to Fantasy Moguls‘ Steve Mason.
A sweet, amusing and reasonably profound save-the-earth parable, WALL*E‘s reliance on 85% visual, mostly dialogue-free storytelling (which makes it a kind of silent film) recalls the artistry of Charles Chaplin, Harry Langdon, Jacques Tati and other others whose style of performance art has been dormant for so many decades. It lives again.
Of course, not everyone is going to understand how good this film is. A woman who saw it with me said to a young publicist on the way out, “It’s nice but I was bored.” So beware — some are going to say it’s not…whatever, snappily entertaining enough according to current popcorn-munching standards. Anyone who says this, trust me, is a plebe and a moron in terms of their cinematic taste buds.
Six months into 2008 and WALL*E is one of the two or three best so far, if not the best of the year. It’s a major film and an occasion for enormous pride on Pixar’s part.