Here’s an excerpt from Stone’s article:

“The Boomers are responsible for having created most of American culture up to Obama’s presidency. They are on their way out and eventually, the Millennials will be taking over as the dominant generation that is inventing and re-inventing American culture. That is good in some ways, bad in others.

“The Boomers aren’t really going to help us through this moment because they remember their counter-culture days and that makes them more sympathetic to the ‘woke’ movement.

“My generation, Gen-X, is the only group that has maintained most of our subversive, or questioning authority mindset, which is why you see a lot of Gen-Xers like me pushing the boundaries of what is and what isn’t acceptable to talk about, think about or write about. This is the first time in my life I’m grateful to be part of that generation.

“I come from the unique vantage point of having spent the last 28 years of my life, exactly half, online. That means I had a full life before smartphones, the internet and social media. But if you imagine everyone you know who is around 28 or younger, they have spent their entire lives with an internet, and much of it with social media and smart phones.

“Human evolution, culture, society — it’s all a dance. It’s about adaptation, survival, endurance. It is a test for who has the right stuff to make it through.

“Zoomers have come of age as social media natives. They know no other way of living except that they use their phones a lot. Everything that happens to them happens on their phones. They have already grown up knowing that they must self-censor or they will be swarmed and attacked by their peers.

“Unless they make a conscious effort to unplug, which I hope they do, Zoomers are never coming out of their online spheres. That is the future, full stop. But we’re not quite there yet. There is still a whole America that isn’t yet living online the way Zoomers do. They’ll turn out to buy tickets to movies if it’s something that catches their fancy but it isn’t something they’re committed to as previous generations were.

“Zoomers are most definitely in the Matrix and blue-pilled. They don’t yet know, most of them I figure, that they can rebel against the system if they want to. They tend to be mostly agreeable and compliant when it comes to a society ordering them how to think, speak, behave, etc.

“But there will come a day when that changes. They will likely push back against all of it. And THAT, my friends, will be a time to be alive.

“Right now, though, we’re dealing with a media that doesn’t quite get the message yet about why people are going to tune out content that they see as inorganic and contrived to serve a specific agenda. The new religion of the [wacko] left is more or less like any religion. Where virtue is the goal, nothing else can survive. The idea is that they want to be good, and so all movies have to also be about being good.” 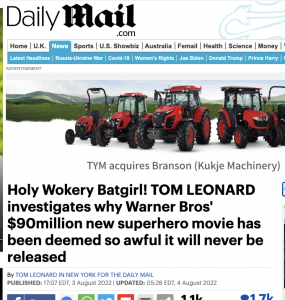 From Kat Rosenfeld‘s “The Progressive Puritans Will Fail,” an 8.18.22 Uherd essay:

“Here’s the thing: you can only see them online, and here they are preaching to the choir in an otherwise empty church. It is only the true believers who are left, feeding on and off each other, stewing in fear and resentment while everyone else goes outside and has fun. And as loud as they might seem to themselves, and each other, within the confines of their echo chamber, the truth is that outside of it they’re not just irrelevant, but nearly invisible. Their power, and their numbers, are diminished by the mere existence of normal people living normal lives.”

August 18, 2022by Jeffrey Wells72 Comments
« Previous post
Nearly Half A Billion
Next post »
A Tragedy That I Missed This