If you listened closely to what was said at tonight’s Oscar panel at the 92nd Street Y — called “Reel Predictions: Countdown to the Oscars” — you heard several subtle, polite and deftly worded putdowns of The King’s Speech. So subtle that I can’t offer (i.e., remember) a single money quote, but the sound of Tom Hooper‘s drama being needled throughout the evening for being too pat and tidy, too “safe,” and not all that interesting was music to my ears.

Quite possibly the blurriest and/or least distinct photo anyone has ever taken of N.Y. Times critic A.O. Scott (l.) and Columbia film professor Annette Insdorf (r.), either together or separately.

These and other light-fingered reprimands were voiced by Columbia University Film Professor Annette Insdorf, the discussion’s moderator, and at least two of the four panelists — N.Y. Times critic A.O. Scott and author/film journalist Mark Harris. Remarks by author and essayist Molly Haskell didn’t exactly flatter The King’s Speech, but they didn’t downsize it either. Or so I recall.

42West marketing director Amanda Lundberg restricted herself to explaining how award season marketing is basically a process of monetizing client assets and that line of country. My mind glazed over.

Harris briefly brought up the Melissa Leo brouhaha about her self-financed ads, but nobody else had anything to add and before you knew it Insdorf had changed the subject.

Insdorf is one of the brightest and most knowledgable film mavens on the planet, but at times she plays, I feel, the gracious diplomatic card to a fault. Butter wouldn’t melt in her mouth when it comes to voicing any sort of negative judgment, or encouraging it in others. And so it seemed to me that she too often led the discussion in directions that were more college-classroomy than critical or exploratory or…whatever, Bill Maher-ish.

If you ask me there were entirely too many clips of Oscar-nominated films shown. The evening would have been much more interesting, in fact, if Insdorf had just tossed them altogether. It’s February, after all. Haven’t we seen the same clips from the same films over and over and over? 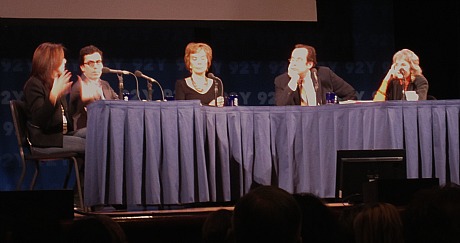 Insdorf noted that while personal loyalty is a strong and consistent behavioral trait in many of the year’s Best Picture contenders — certainly in The King’s Speech, The Fighter, The Kids Are All Right, Toy Story 3, True Grit and Winter’s Bone — it is absent from The Social Network in the behavior of Jesse Eisenberg‘s Mark Zuckerberg, and that perhaps this was a factor in the industry’s choosings. Scott and Harris quickly jumped in and said that Eisenberg’s capacity for betrayal didn’t affect their enjoyment of The Social Network one iota; indeed, it made the film all the more intriguing.

I wanted to ask my question of the moment, to wit: “Why after choosing three tough films with tough subjects for Best Picture — The Departed, No Country For Old Men, The Hurt Locker — has the Academy, like a lapsed alcoholic, gone back to favoring a very good-but-not-great, lump-in-the-throat, comfort-blanket movie like The King’s Speech?” But I candy-assed out and didn’t raise my hand. I guess I’ve lost the fire in the belly. February 27th can’t get here soon enough.

There was also a certain element of suspense in my trying to take photographs of the panelists without getting busted by the 92nd Street Y ushers. The place has a strict no-photography rule. That’s to keep flashbulbs from going off, I’ve always presumed, but how could a non-illuminated snap or two from my little 14 megapixel Canon Elph be a problem? But it was. At one point I thought I was about to get heave-ho’ed. My inability to get close enough to the stage and/or sufficiently focus, in any event, resulted in the worst shots I’ve ever captured of a public event.