For me tonight’s Oscar show was defined by an agreeably classy vibe, nice but less than historic production numbers, and a couple of big shockers — the defeat of The Wrestler‘s Mickey Rourke by Milk‘s Sean Penn in the Best Actor race, and Departure‘s defeat of Waltz With Bashir and The Class to take the Best Foreign Language Oscar.

And the utter predictability of just about everything else.

The best innovation by producers Bill Condon and Larry Mark was having five Oscar-winning actors of the past come out as a group and praise each of the five nominees. Nice tough — classy, gracious, communal. Keep it.

The biggest non-shock of the evening came when Slumdog Millionaire took the Best Picture Oscar — a triumph that had been predicted for many months. Watching the entire happy Slumdog family together on-stage was certainly a moment. The difference was that “we had a script that inspired mad love,” said a smiling producer, and “we had a shared love for Mumbai, the city where we made the movie,” and “we had passion for the movie itself.”

It was a pleasant-enough Oscar show, but the wild voltage just didn’t happen. What voltage could have happened? It wasn’t in the films, not really, and the show itself, while very crisp and professional and agreeably slick in many respects, felt almost too smooth. No missteps, no bad moves except for the awarding of Departures, nothing gauche or excessive, no streakers, no Sasheen Littlefeather, no Jack Palance push-up jokes…nothing.

Judd Apatow‘s short film costarring the great Seth Rogen and James Franco and Janusz Kaminsky was easily the best thing on the show. Hilarious. Laughed out loud often. Rogen and Franco should have hosted the show with their dopey-sharp-brilliant Pineapple repartee. Would’ve been great.

The shocker of the night finally (if not all that welcomely) came when Sean Penn won the Best Actor Oscar for his work in Milk, and Mickey Rourke, whom everyone was picking to win based on the momentum of the last two or three weeks, didn’t. But no shame on the vote or the choice. Penn did very, very well by Harvey Milk in Milk. He found his inner gay man and made him smile and sing out. 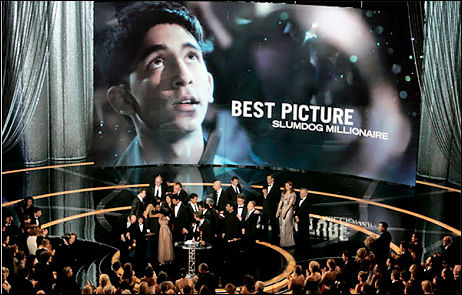 Kate Winslet won for Best Actress, and good for that. Many of us are convinced that this award is really for her work in Revolutionary Road, which is a far, far better film than The Reader.

Penelope Cruz won the Best Supporting Actress Oscar for Vicky Cristina Barcelona. As expected and predicted by everyone in the world except for David Carr, a.k.a., “the Bagger,” who wrote that the great Viola Davis (Doubt) would take it. It would have been great indeed if she had, but Davis got a serious career bump and that’s what counts.

The opener was okay. Hugh Jackman was relaxed and into it as far as it went. We were all watching an Oscar ceremony at the Ambassador Hotel in 1937. Where’s Fredric March? Jackman sang a bit of a hokey medley song, okay, but the silly-foolish energy appealed. Anne Hathaway, I felt, did herself proud. Chummy, loose, felt fine.

Departures, reportedly a nice, good-enough drama, shocked much of the civilized world (with the exception of Kris Tapley, who predicted that it might win) by taking the Best Foreign Language Oscar. Israel is weeping and stamping its feet over the loss suffered by Waltz With Bashir, which is incontestably one of the most original and searing films of the year. 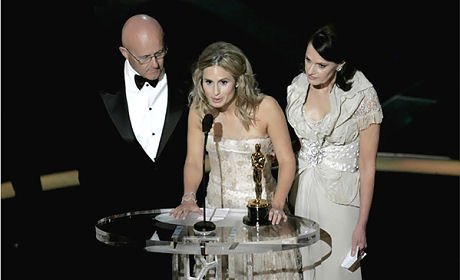 It’s a crime that this happened. Those infuriating foreign language people! To go by Tapley’s recent description, Departures is a kind of Japanese Salieri film. Decent, heartfelt, respectable — and not even close to Bashir‘s calibre.

A sense of boredom was manifest due to the predictability. Every award except for Best Actor and Best Foreign Language feature fell right into line.

Ben Stiller‘s Joaquin Pheonix routine was, for me, quite funny. The first time I laughed out loud as opposed to chortling or chuckling or just smiling.

The Best Original Screenplay Oscar went to Dustin Lance Black for political reasons. Politics and political point- making as it affects the here-and-now — particularly the bruising that was Prop 8 — always matters. Black’s thank you was eloquent and very emotional. “Thank God for giving us Harvey Milk.”

The first Benjamin Button tech Oscar was for Best Art Direction. The Costume Design Oscar always goes to the movie set in a ruffly and exotic time period, so naturally the winner was the 18th Century The Duchess. Button has also won the Best Makeup Oscar. 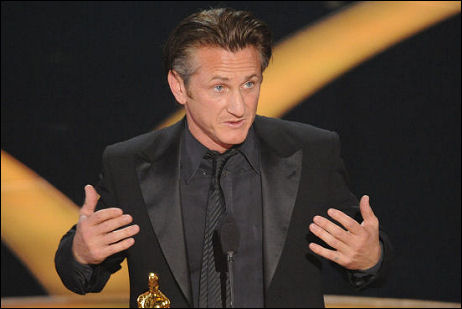 Congratulations to Toyland for winning the Best Live-Action Short Oscar.

The Best Adapted Screenplay Oscar went to Slumdog Millionaire‘s Simon Beaufoy as an expression of the general sweep mentality surrounding and supporting this film.

“The man who wrote that is now dead…every blank page was once a tree.” Steve Martin‘s Oscar podium material (which I presume he’s written himself) always plays better than the material in his films.

The Dark Knight‘s Heath Ledger, of course, took the Best Supporting Actor Oscar. Ledger’s dad, mom and sister accepted. “An original and enduring legacy” indeed. A feeling of sadness, solemnity, finality. “On behalf of your beautiful Matilda….thank you.”

Bill Maher‘s introductory remarks for the awarding of the Best Documentary Feature Oscar contained, naturally, a slight plug for Religulous . The Oscar, of course, was won by Man on Wire and director James Marsh. Phillipe Petit ‘s coin trick and Oscar nose-balancing was exquisite. And congratulations to Megan Mylan and Smile Pinki for winning Best Doc Short.

Jerry Lewis accepted his Oscar with dignity, brevity, graciousness. Not a trace of snip or caustic wit, even. Short and sweet, in and out, thank you from the bottom of my heart, etc. 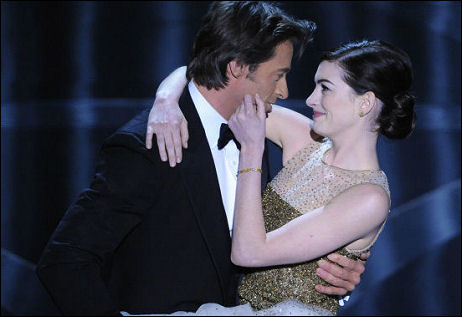