Over and done with

“When Mort Sahl first swooped, in the ’50s, there was a much more homogenized, middlebrow media landscape — fewer than a handful of television networks, no internet, no satellite radio, no iPods,” James Wolcott observes in a profile of the legendary comedian in the just-delivered August issue of Vanity Fair. 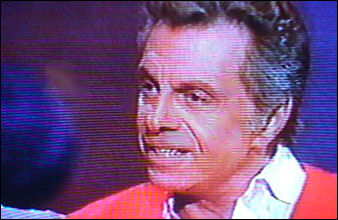 “Except for cable-news junkies, keeping up on current events is practically an aristocratic pursuit these days. And cultural allusions? Forget it. You can’t assume the audience knows anything beyond the latest thong-snappings in the supermarket tabloids. Fewer and fewer ticket buyers may go to Lindsay Lohan‘s movies, but everyone knows who she is.
Conversely, “when Sahl mentions Estes Kefauver in a Fresh Air interview with Terry Gross on NPR, he’s drawing a name from an abandoned well. Even I, a phony student of history, have to rub a couple of sticks together in my head before the name Estes Kefauver computes.”
This prompted a question: which former household names from yesteryear’s Hollywood realm — major stars, big box-office, former cultural icons — have so dropped off the planet that you average 28 year-old movie buff has not only not heard of them, but wouldn’t want to know who they were with a knife at his/her back? Who, in other words, tops the list of the filmdom’s most historically dead, forgotten and irrelevant?
If you ask me, there’s no one who more forgotten than Bing Crosby. Nothing he did in movies plays appealingly in today’s terms. He comes off as smug and bland and about a half-inch deep. Loretta Young and Glenn Ford are right behind Crosby. The list could go on and on, but contributors have to confine themselves to people who were serious megastars in their time.