As one who’s reported on the shortcomings of movie-ad campaign decisions by Lionsgate marketing vp Tim Palen (such as Dane Cook‘s 8.12 complaint about the one-sheet for My Best Friend’s Girl) and voiced my own issues from time to time (like the gay-metrosexual ads for 3:10 to Yuma), I have to take my hat off and say “job well done” regarding those new W ads. 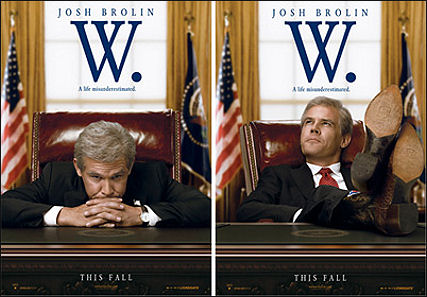 The slogan, in particular, is a bulls-eye: “A Life Misunderestimated.” (And it’s not finessed. About.com’s Daniel Kurtzman has reported that Bush said “they misunderestimated me” in Bentonville, Arkansas, on Nov. 6, 2000.) Crew Creative was hired to turn out the ads, but the final creative call always rests with the top in-house marketing guy.
Ad Age‘s Claude Brodesser-Akner is reporting that the W posters will be billboarded in Denver and Minneapolis during the respective Democratic and Republican conventions. The piece doesn’t make clear if the more swaggering poster image of Josh Brolin‘s Bush (look of calm and confidence, cowboy boots up on desk) will be used in Minneapolis while the more doofusy-looking one will be used in Denver, or if the posters are meant to be regarded side by side.
It would be great, of course, if W is on tomorrow morning’s list of the final Toronto Film Festival titles. Here’s hoping. W is opening on 10.17, or slightly more than a month after the festival concludes.
Sidenote: A page on Crew Creative‘s website takes credit for the much-maligned poster for My Best Friend’s Girl….whoops.