Why Is Patriots Day Shortfalling? 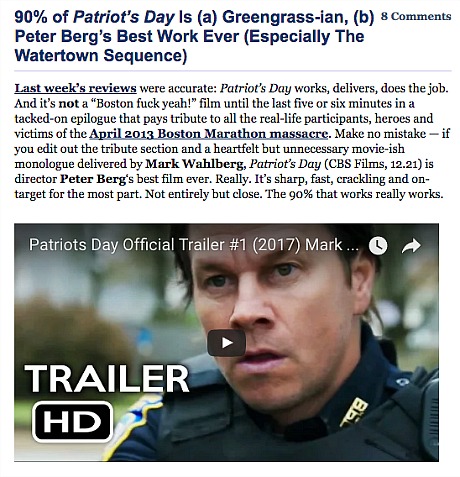 D’Allesandero suspects that Patriots Day‘s failure to generate awards talk may have been a factor. The film may have also been affected by the same “too soon!” sentiments that helped contribute a decade ago to the shortfalling of Paul Greengass‘s dead-brilliant United 93 (’06).

D’Allesandro reminds that except for the 35-49 crowd giving Patriots Day an A, everyone else rated it as a solid A-plus.

From HE regular Nick Clement: “Saw Patriots Day today. Amazing, gripping, sad, expertly directed, with verisimilitude levels off the charts. Schleissler’s camerwork is stunning. I can’t believe this film isn’t getting the respect it deserves. Berg had a banner year. The Watertown shoot-out is stunning; Bay will shit himself, and he did a great job with the urban warfare stuff in the underrated 13 Hours.

“But Patriots Day…damn. Maybe it’s because I live in Connecticut (the theater was absolutely PACKED and nobody spoke a word — huge applause at the end) but this movie is gonna hit hard for some people. It’s a scary world and I get it — people don’t want to be reminded that they can get blown up at a marathon — but what a nation of ostriches we’ve mostly become. I can’t wait to see this film again. Something this thrilling and cinematic can’t get lost in the shuffle.”

From another friend: “I agree 1000% that the Watertown shootout sequence is superbly done on every level. [And] the lead-up to that with the Asian student being kidnapped was tense and riveting. You felt for that kid. The terrified look on his face told all.

“That said, the likeliest reason for the low turnout is, boiled down, the familiarity factor.

“Lone Survivor did well because it wasn’t an oft-told tale and it wasn’t that well known.

“Deepwater Horizon was a tragedy in real life and people didn’t want to go to a movie theater and be “entertained” by watching people die horrific deaths by fire (one of the worst ways to go, let’s face it) even if the film promoted it as a “heroic” struggle. It wasn’t heroism to try and avoid a fire by jumping into water. That aside, that film tanked because everyone knew the outcome. Terrible tragedy, corporate fuck-up, 11 people died.

“Patriots Day has the same issue. People know the story. However well made the second half is, the first half is kind of pedestrian. None of the characters are that well developed including JK Simmons‘ Watertown Police Chief. Oddly enough, it’s the terrorists who seem to get most of the face time (those two guys were terrific).

“People seem to gravitate to stories that aren’t overly familiar, Hidden Figures being a perfect example. No one knew that story existed though it’s true. It wasn’t that familiar. Both Deepwater and Patriots Day suffered because they were just too familiar.”

January 14, 2017by Jeffrey Wells27 Comments
« Previous post
Bobby As Bernie
Next post »
Hidden Figures Will Again Be #1 This Weekend