In an interview with Collider‘s Steve Weintraub, The Social Network/The Girl With The Dragon Tattoo director David Fincher has said that the latter film, due in December 2011, will be strictly set in the year and the technological realm of 2003, or “pre-iPhone.” That’s because author Stieg Larsson was “probably thinking” of a 2003 world when he wrote the “Girl” books, Fincher says. 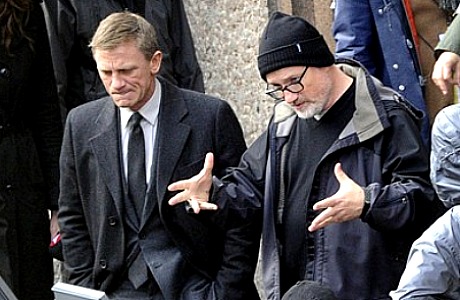 The Girl With The Dragon Tattoo star Daniel Craig, director David Fincher during filming in Sweden.

“What year does [the story] take place in?,” Fincher says. “Well, Larson’s books are delivered in 2004, so he’s probably thinking in terms of 2003, it’s not published until 2005, 2007 is the iPhone, so all those apps that would be available to the iPhone are probably something that Lisbeth Salander would have access to ’cause she’s a bit of a Mac junkie. So you kind of go, ‘Well where do we draw the line?’ So we just said, look everything has to be pre-iPhone technology, because otherwise they would be sitting there going ‘Well, we just go over here.’ They would have a compass; they would be able to tell what the weather was like.

“So there’s all that stuff, you just have to make a decision [that’s] fairly arbitrary, basically everything in the movie is pre-iPhone.”

Once again, Fincher is sharing his basic Holy Grail faith in the Larsson books. They’re sacrosanct and part of history and can’t be changed in the slightest detail — they have to happen in Sweden despite the rank absurdity of all the characters speaking in English, and the story has to happen within the exact same culture that was influencing Larsson when he was writing the books. I respect Fincher’s aesthetic integrity, but going strictly period just feels weird to me. Think of all the changes that have to be enforced in terms of cars and flatscreens and God-knows-whatever-else. How could the story be affected that heavily by the use of Google Maps and having a good idea what the weather will be like a couple of days hence?