“Pictures at a Revolution”

Mark Harris, author of the just-out “Pictures at a Revolution: Five Movies and the Birth of the New Hollywood” (Penguin), told me a week or so ago I’d be getting a review copy. But nothing turned up and I figured I’d been blown off, especially when I read Janet Maslin‘s 2.11 N.Y. Times review online. But just as I was tapping this item out a Fed Ex guy knocked on the door and handed me a package with Harris’s book inside. Timing! 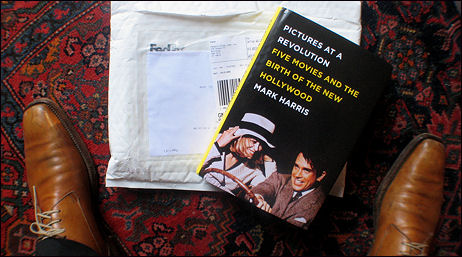 I’ll get around to writing a reaction later this week. In the meantime, the first four graphs from Maslin’s review:
“In the same year and even on the same planet, five crazily diverse films became nominees for the Academy Award for best picture in 1967. At its April 1968 ceremony the academy chose among an instant-classic vision of the brand new Generation Gap (The Graduate), a painfully dated Hollywood dinosaur (Guess Who’s Coming to Dinner), a fierily innovative, mythic outlaw tale (Bonnie and Clyde), a walking lecture on racial prejudice (In the Heat of the Night) and a budget-busting musical full of animals (Dr. Dolittle). The last of these, stinker that it was, appropriately had to be filmed on sets with drains patrolled by workers wielding brooms.
“It seemed to be a boom time for the movie business. When Variety, in 1968, printed its list of all-time top-grossing movies, a third of them were 1967 releases. And yet, as Mark Harris explains in a landmark new film book, ‘Pictures at a Revolution,’ the whole industry was poised on the brink of irrevocable change.
“Mr. Harris sifts through the evidence with reportorial acumen and great care, conjuring up the social and cultural history of a lost world and drawing on sharp new interviews with many of its major players. Forty years after the fact, people like Dustin Hoffman, Mike Nichols, Arthur Penn, Warren Beatty, Sydney Pollack, Robert Towne, Robert Benton, Lee Grant and Buck Henry sound as if they’re still making sense of 1967’s tidal wave. 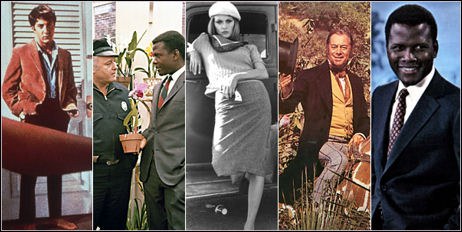 “‘Pictures at a Revolution’ can take its place alongside top-shelf film industry books like ‘Easy Riders, Raging Bulls,’ ‘Final Cut,’ ‘The Studio’ and ‘The Devil√É¬¢√¢‚Äö¬¨√¢‚Äû¬¢s Candy’ for qualities all of them share: the big-picture overview, the nuts-and-bolts understanding of exactly how films evolve from the drawing board to the screen, and gratifying antennae for all forms of Hollywood-related horror stories.”