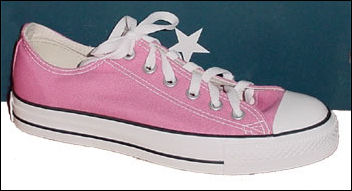 “In just the way that Sofia didn’t treat [the story of Marie Antoinette] as a straight biopic, we’re taking a unique approach,” Van Galder explains. “We’re having fun with the marketing. The movie has captured people’s imagination.”
Surely Van Galder doesn’t mean the movie itself — which I’ve over-campaigned against, I realize — has done the capturing. What she means, I think, is that the idea of Sofia Coppola putting pink converse sneakers into a shot of Marie Antoinette’s closet (or against some other backdrop) has caught on within the culture of female movie journalists, columnists and magazine editors along with, I suppose, some of their male gay counterparts. Kind of a “you go, girl” thing.
Hollywood Bytes columnist Elizabeth Snead has written that “the modern pink footwear creates a funny, girly, rebellious moment in a frothy film about a young girl who just wants to flirt, shop and party in 18th century France. And the sneaks also work with the film’s punky pink ads and the pink-themed court parties, pink champagne, pink wigs, and pink pastries.
“More importantly, the shoes are also a bright pink emblem of Sofia’s creative and independent spirit.”
Snead reports in the same column that “someone asked Coppola about the pink tennis shoes and she explained that it was her brother Roman, her second assistant director on the film, who put them in the shot. Dunst stayed comfortable wearing pink Converse tennis shoes under her royal gowns during filming. You never see them on [her] but there is a funny shot of the tennis shoes that remains in the film.”