“I’ve never set out to diminish the seriousness of what Roman Polanski did, but it comes down to crime and punishment. How much do you have to pay for the crime? What I’ve always set out to prove is, despite what Polanski did, which was awful, he was treated unfairly by the judge. That’s the bottom line.” — Filmmaker Marina Zenovich to Charles Lyons in today’s N.Y. Times about Polanski’s unlawful-sex-with-a-minor case, which she’s been making a documentary about for eons. 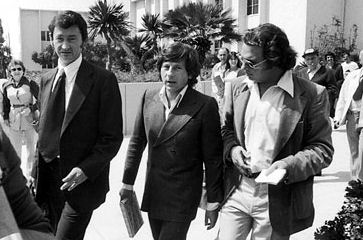 Zenovich’s film, “untitled and unfinished” but presumably heading for a debut at next January’s Sundance Film Festival and some kind of commercial exposure in ’07, which marks the 30th anniversary of Polasnki’s unlawful sex with a minor case, takes a closer look at the manner and tactics of the presiding judge in Polasnki’s unlawful sex with a minor case — the late Laurence J. Rittenband.
Zenovich, a very smart, extremely tenacious pro whom I’ve known since the late ’90s, tells Lyons “it is impossible to reach conclusions about Mr. Polanski without drawing Judge Rittenband into the equation.”
I’ve been hearing this for years (most lately from Polanski biographer F.X. Feeney), but judging from Lyons’ carefully phrased article, Zenovich’s conclusion in this reportedly exacting and meticulous doc is that Rittenbrand handled the Polanski case rashly. One could go so far as to describe his judicial behavior in this matter as that of an intemperate, Judge Roy Bean-ish, shoot-from-the-hip asshole.
Zenovich “describes the judge as having lived the kind of vibrant personal life easier to associate with Polanski,” Lyons writes. “‘He was never married, and he loved being kind of a swinging bachelor, juggling a couple of girlfriends at once,’ Zenovich tells him. “What’s most interesting about him is that he tried to come across as so moralistic, but eventually I found out that this was a man who had a 20-year-old girlfriend when he was 54.”
“Even from the unfinished film, it is apparent that Zenovich — who made an earlier documentary, Who Is Bernard Tapie? without the participation of its subject, the French financier and politician — has become intent, like documentary filmmakers before her, on using the form to delve deeper than the written word or television usually allow,” Lyons writes.
Produced by Jeffrey Levy-Hinte and Lila Yacoub and exec produced by Steven Soderbergh, Zenovich’s film “will likely renew the debate over whether Polanski still has a price to pay if he returns to the United States.”