Last night People‘s Mary Green posted a statement from Brad Pitt about being attacked at last Wednesday night’s Malificent premiere by the obviously deranged Vitalii Sediuk, the Ukrainian ex-journalist. Pitt’s statement was presumably given verbally to Green and then transcribed, and that’s fine. It just needs a few edits. Corrections and comments are in bold:

Pitt: “I was at the end of the line signing autographs [no comma] when out the corner of my eye I saw someone stage-diving over the barrier at me. I took a step back [but] this guy had latched onto my lapels.” HE comment: Excellent first sentence, tight and clean, off to a good start.

Pitt: “I looked down and the nutter was trying to bury his face in my crotch [no comma] so I cracked him twice in the back of the head — not too hard [no dash] but enough to get his attention, because he did let go.” HE comment: What does “cracked” mean exactly? A hard open-palm slap? A clenched-fist punch? I myself would have karate-chopped Sediuk on the back of the neck, the benefit being that when the media asks for a quote “karate-chopped” sounds more studly in a martial-artsy way.

Pitt: “I think he was then just grabbing for a hand hold because the guys were on him, and [then] he reached up and caught my glasses.” HE comment: By “caught” Pitt means Sediuk knocked or pulled the glasses off? Apparently so as the above CNN-capture photo shows Pitt without glasses, but did they fall on the pavement or what? Why does Pitt even mention that his glasses were “caught” without saying what the result was? Whoops: A friend tells me Pitt’s glasses broke during the altercation.

Pitt: “I don’t mind an exhibitionist, but if this guy keeps it up he’s going to spoil it for the fans who have waited up all night for an autograph or a selfie [no comma] because it will make people more wary to approach a crowd. And he should know [that] if he tries to look up a woman’s dress again, he’s going to get stomped.” HE comment: I would imagine that after this and the America Ferrara incident Sediuk’s face and features have been circulated to security guys worldwide, and that he won’t be able to get near a red-carpet line henceforth. I love Pitt’s kicker about Sediuk getting “stomped.” 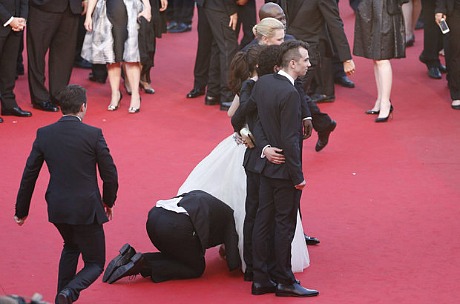